Spearpoint is a city unlike any other. A vast spire dozens of leagues in height, the city and the world around it are divided into zones of different energy states. Different technology and energy sources work in each zone, and any person who spends long periods in another zone may be doomed to death without periodic drug treatments. 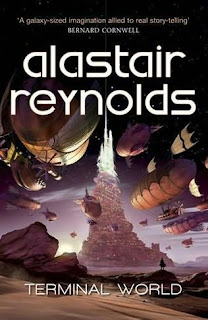 Dr. Quillon is a pathologist, performing post-mortems for the city's law-enforcement agencies in the relatively high-tech zone of Neon Heights. But when Quillon's past catches up with him he has to flee the city. Aided by a young woman named Meroka, a specialist in smuggling packages where they need to go, he finds the world beyond the city to be a strange and alien place. When an unprecedented zonal shift threatens to destroy Spearpoint altogether, Quillon finds himself torn between flight and finding a way of helping ensure the survival of his home.

Terminal World is the ninth novel (and twelfth book overall) by Welsh SF author Alastair Reynolds, best-known for his Revelation Space universe and stand-alone novels such as Pushing Ice and Century Rain. Shortly after this book was handed in, Gollancz gave Reynolds a massive £1 million ($1.6 million at the time) contract for ten new books over ten years. Based on the impressive quality of Terminal World I'm not surprised by this.

Reynolds' normal setting is far-future space opera, usually slanted with elements of gothic horror and film noir. Terminal World sees him doing something different. The novel seems to be more inspired by the New Weird, with some of the atmosphere of China Mieville's novels seeping through (most notably, and interestingly as it came out after Reynolds completed this book, The City and the City, although the lovingly-rendered city also invites comparisons with Perdido Street Station). There is also a strong steampunk flavouring to the novel. Some of the noir elements are still present, particularly in the earlier sections detailing the flight from the city, but the horror elements are restricted to a few creatures and one of the antagonists.

The characters are excellent, well-rounded and convincing. Quillon and Meroka are solid protagonists, people from different backgrounds allied together by circumstances. The other characters they encountered in their travels, such as Fray and Captain Curtana, are likewise well-handled. In my review of FlashForward I attributed that novel's old-fashioned style to its expositionary characters who exist purely to serve the plot. Here the characters are fleshed-out and believable in their own right.

Reynolds also seems to have developed a hitherto unsuspected superb aptitude for writing great battle sequences, with heavy autocannon-armed airships blasting away at one another, the repelling of boarding actions and so on. It's only a small part of the book, but it's great stuff.

At the core of Terminal World lies a huge mystery. Interestingly, it's a mystery that the central characters, Quillon and Meroka, have no real interest in. One of the side-characters does and spends some time discussing it, but at the end of the day he backs off from pursuing it, leaving the reader to digest all the small pieces of evidence that have built up over the course of the novel. What is Spearpoint and what was its original purpose? Why is this the 'Terminal World'? What is the secret of the mysterious Bane and the zones? What is the Eye of God? Enough information is presented for the reader to come to several different conclusions, but the author leaves some of these answers pleasingly ambiguous. There is certainly plenty of scope for a sequel or further books in the same setting.

Terminal World (*****) is superbly well-written with great characters and a fiendishly intriguing mystery. It is a mixture of old-school planetary romance, hard SF, the New Weird and steampunk, all tied up in one rich and enjoyable package. Reynolds tries something new here and it pays off, delivering one of his very best novels to date. Terminal World will be published in the UK on 15 March 2010 and in the USA on 1 June 2010. The absolutely gorgeous UK cover art can be seen in its full glory here. Reynolds' next work will be the 11K Trilogy, which explores humanity's development over eleven thousand years of future history.
Posted by Adam Whitehead at 16:45

Been looking forward to this one for a while. Glad to hear its another cracker from Reynolds.

One question though: Hows the ending? That's always been the main weakness of Reynold's work, although he has been getting better of late.

Great review Adam - thanks.
Really looking forward to it now - had it on order for sometime now.
With this weeks discussion, which you have commented on, on the future SF and Fantasy its interesting to see Al Reynolds sliding into a near fantasy realm. Though in a far different manner to Richard Morgan's similar dip. Of course there's Peter Hamilton mixing it all up in the Void! But we love variety - and that's what keeps us buying the books!

TERMINAL WORLD is very much hard SF. Unlike THE STEEL REMAINS, where it remains to be seen if the SF elements are just window dressing or something more key to the story, this one is definitely an SF story. The difference is that it has a steampunk/New Weird veneer applied to it, but Reynolds gives you the answers if you want to look for them.

The ending is pretty good, including his most obvious use of the 'climatic battle sequence' idea. It's not quite that neat though and there are some questions left unresolved. The ending is open enough for a sequel or further work in the same setting, certainly.

Intriguing - Mr Reynolds seems to be getting subtler as his books come out. No wonder he got that contract. In the mean time Amazon tell me my copy of Thousandth Night/Minla's Flowers is on its way to me - something else to look forward to.

Will pick this up - hadn't really known about it and your review swayed me. Nice job.

And I remain convinced that Clute's Appleseed is one of the great underrated SF books ever written. Why did he never write more books?

Looking forward to this one. I picked up Revelation Space a couple of years ago and gave up after about two hundred pages. I'm not sure why I couldn't get into it initially (I was more into fantasy back then, that might explan a lot of it), I picked it up again a few weeks ago (in the midst of exams and projects and papers that needed to be handed in shortly.. isn't it always like this? Last year I ended up watching both season of Rome during my study week) and finished it in only a couple of sittings.

I read a (rather unenthusiastic) review for Revelation Space on another blog and the blogger said that although the book didn't quite meet his expectations, the opening scenes stuck with him and the exact same thing happened to me after my initial attempt, despite the trouble I had getting into it. I couldn't actually remember what book the scenes in question were from until last week.

Anyway I'm quite looking forward to this one, China Miéville is hands-down one of alltime favourite authors and what with my newfound enthusiasm for Reynold and your review, I'm sure I'll enjoy it.

2010 looks like a bumper year .. as far as I'm concerned. Seems all my favourite authors are getting a book published!

Clute has written many metric tons of articles and books, they're just all criticism rather than fiction, plus the massive encyclopedias of SF and Fantasy, still, despite being outdated, the definitive reference works to the genre.

I know Clute's been busy as a professional critic, but the fiction work was so good that I believe he'd be better served writing more fiction.

In 40 years, who's going to remember a critic? How about someone who won Hugos/Nebulas/Locus awards etc. I believe Clute's got that kind of talent.

I thought Appleseed was the single worst novel I have ever read - and not just in SF. I find Clute's critical writings to be pretty torturous to read, too, so I've given that up.

But I am looking forward to reading Terminal World - thanks for the review.

Hi Adam -
I have now read the novel - not knowing what expect after a glowing review from yourself, and less favourable ones such as that by Liviu on FBC.
It seems that Reynolds has held back on the (at some times) overwhelming wow factor of his earlier novels. On the ending as well - with a feeling of hope and expectation but not a final resolution - at least the machines did not provide the instant solution. Was Quillon the right choice for 'hero'? I note a similar feel in the writing to Wolfe's Severian as a man not in control of his destiny for much of the time - and reporting to us in a confused way what is happening. BUT I did enjoy the restraint and the gentle revelation of the picture being built up - albeit puctuated by much of Reynolds great action sequences. The whole passage to the climax nicely handled with each revelation carefully unfolded.
I look forward to the next!
Andrew