A group of scientists conduct a cutting-edge experiment at the CERN facility on the French-Swiss border. At the precise moment the experiment begins, every single human being in the world blacks out. For two minutes they experience a lucid vision of the world as it will be in 2030, twenty-one years from now, before returning to the present. In those two minutes thousands of people were killed as planes crashed on take-off or landing, people fell down stairs and cars crashed. 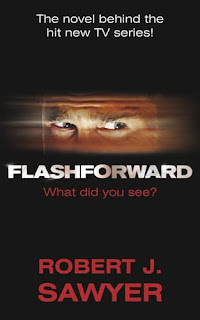 For the scientists, other questions are raised. One saw himself with a woman other than his fiance, and becomes intrigued by her identity. Another saw only blackness and discovers through others' visions that he was murdered, and becomes obsessed with preventing this event. But can time be altered, and can - or should - the experiment be repeated?

FlashForward is a science fiction novel by the Nebula and Hugo Award-winning Canadian author Robert J. Sawyer, originally published in 1999. It's a high-concept book which the blurb terrifyingly likens to Michael Crichton, although thankfully baselessly. It also serves as the basis for the current new American TV show of the same name, the arrival of which was the catalyst for the book's recent re-release.

This is a very old-school SF novel where the author has come up with an excellent premise and sets about exploring it and setting up an interesting storyline based around the mystery, somewhat at the expense of characterisation, which is where I'm guessing the Crichton comparisons come into play. Luckily, the book actually features some interesting and sympathetic characters rather than just author-insertion heroes and strawmen opponents, but the characters are not developed very far, serving as they do more as a simple POV on the unusual scientific phenomena and its ramifications. This isn't an overt criticism - in-depth character-building is simply not the book's goal - but it does make the book feel a lot older than its ten years would indicate. 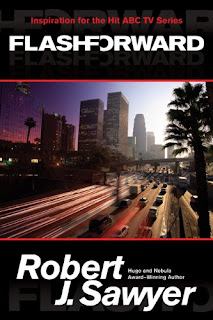 Putting that to one side, the book is a pretty good SF story, fast-paced with lots of intriguing ideas. One slight problem is that it was written in 1999 and set ten years in the future, so it's set this very year but a lot of the ideas in it (such as the holographic Windows 2009) haven't come to pass, dating the book before it's out of its first decade. However, some of the ideas discussed in the book, particularly at the end, can actually explain this, so it's not a huge issue.

The exploration of the premise is mostly well-handled, although it takes a while for the author to address some of the questions the reader may be asking immediately after the incident takes place (it takes quite a while before someone thinks about checking CCTV footage taken during the incident, for example), and in some areas actually goes into areas which the reader may not have immediately considered (for example, what happened to animals during the event?). The result is an interesting puzzle which the author provides some possible, but not necessarily definitive, answers for during the unexpectedly epic climax.

FlashForward (***½) is a readable and effective old-school SF novel which comes up with a great idea, explores it intelligently, and doesn't outstay its welcome. Those looking for in-depth characters or themes should probably look elsewhere, but for a decent and easy SF read, this book does its job well. It is available now in the UK and USA.
Posted by Adam Whitehead at 23:12

Sounds interesting! Ironic that it's now dated as far as the real life timeline.

The show's been pretty good so far, imho. It's definitely a really cool idea.

I think people should post the word verification: radrevin (I thought this was funny)