Tobey Maguire up for THE HOBBIT?

With pre-production of The Hobbit now well underway and filming planned for early 2010, casting rumours are starting to circulate in earnest. Sir Ian McKellen recently claimed to be the only returning castmember from the trilogy, but Andy Serkis and Hugo Weaving had both previously indicated they should be returning as Gollum and Elrond, respectively. 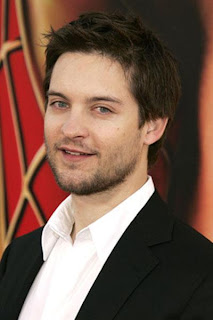 Hobbit-in-waiting?
The casting of Bilbo Baggins is currently the biggest question over the topic, with Daniel Radcliffe ruling himself out due to fantasy burn-out. Soon-to-be-former Doctor Who star David Tennant has been heavily rumoured, but current favourite is probably Scottish actor James McAvoy (who also gets Radcliffe's backing).

A new name has now entered the ring, with the Latino Review claiming that Spider-Man star Tobey Maguire might be a contender. According to their sources, Maguire is in talks with the film's producers. Apparently he is very keen to work with director Guillermo Del Toro on a project.

What is likely to be a key consideration over whether this happens or not is timing. Spider-Man 4 begins shooting in March 2010, which is tight given that The Hobbit's start date (not set in stone yet) has been mooted for between April and June 2010. It's possible that Maguire's involvement could be a good reason for a later start date to be picked, and indeed just recently there was some talk about filming being held back to the summer, so this could all come together nicely.

The Hobbit is currently planned to film for a year and should be released in two parts, with the first part being released in December 2011 on the tenth anniversary of The Fellowship of the Ring.
Posted by Adam Whitehead at 00:18

I hope it's not true...really, I think he's one of the worst guys for the job. In everything I've ever seen by him he's either a cardboard box (the Spiderman movies) or overacting to the extreme (that new one he has). Still better than the Harry Potter kid though, IMO

According to the OneRing.net it's the first they've heard of it, and they're usually first on the ball with these things (and they have direct contacts with Jackson), so it may come to nothing.

Hmm, not sure about that choice, either.

And has it really been that long since Fellowship???

Oh God I hope not, he'd be an awful Bilbo. McAvoy is probably the best choice and maybe Tennant would be good. They don't need a massive name to play lead - Hell even a relative unknown would be good.

I'm surprised they couldn't just get the guy who played Bilbo from the "Lord of the Rings" movie to play him (Ian Holm). Didn't Gandalf actually say at one point in "Fellowship" that Bilbo "hadn't aged a day" since he'd last seen him, and that the ring was prolonging Bilbo's life while delaying old age?

Hell, for that matter, they had him as Bilbo in the "Fellowship" introductory flashback to "The Hobbit", in the scene where Bilbo finds the ring on the ground in the cave.

Or are they showing Bilbo as a younger man at some point?

Ian Holm is getting on in years, he probably couldn't do the physical aspect of the role.

Yup, Ian Holm was quite advanced in years at the time and they wanted to cast him as a shout-out to him playing Frodo in the BBC radio adaptation of LotR in the 1980s (which actually inspired some of the pacing and writing decisions they made on the movies, such as removing Tom Bombadil). He's now ten years older than he was in LotR, so it's unsurprising that they've decided they won't be able to convincingly make him look younger and have him doing the more physical parts of the role.

I hope they don't just make Bilbo in the movies Frodo Mk. 2 though. Bilbo is a bit stuffier and more conservative than Frodo (although in the books not much older than when Frodo began his adventure) and I hope they keep that element in the story.

Making him Frodo Mk 2 is one very good reason that Maguire would be wrong for the part, he's not at all dissimilar to Elijah Wood. I always thought of Bilbo as a fussy middle aged character a little round in the middle, that's not any of the actors named.