New French editions of A SONG OF ICE AND FIRE

As related on Westeros.org, the French publishers J'ai Lu are reprinting the first four volumes of A Song of Ice and Fire. The books have hitherto only been available in French in three volumes apiece (four for A Storm of Swords), so this will be the first time they are available in one-volume editions. 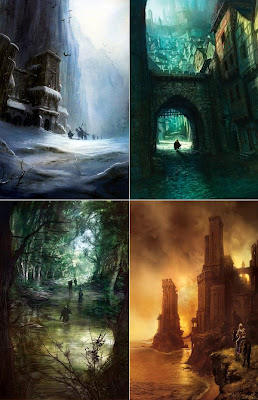 Top row: A Game of Thrones (Castle Black), A Clash of Kings (Tyrion & King's Landing)
Bottom row: A Storm of Swords (a forest), A Feast for Crows (the Greyjoy castle, Pyke)
A Game of Thrones and A Clash of Kings will be published in January 2010, followed by A Storm of Swords in June and A Feast for Crows in September. The cover artist is Marc Simonetti. Higher-quality images can be found on his gallery. Images with the titles on can be seen here.
Posted by Adam Whitehead at 02:39

Email ThisBlogThis!Share to TwitterShare to FacebookShare to Pinterest
Labels: a song of ice and fire, george r.r. martin, news

Oh my, Simonetti's artwork is ... breathtaking, mesmerizing. That picture of the Wall ....

I agree, some of those pictures (particularly the one of the Wall) are absolutely gorgeous. I'm using the "Name of the Wind" picture from his website as my background wallpaper on my laptop.

The problem is that recently there's been an "integral" edition (by Bragelonne, those who do the TP edition, while J'ai Lu does the MMPB (there's no HC)), and the new volumes were made exactly of 3 former volumes. So we had for the first book all of AGoT, plus 1/3 of ACoK.

No other volume appear on Amazon for Bragelonne, while the first two are announced for J'ai Lu, both in January. That's a bit strange, I thought J'ai Lu was doing the MMPB of the Bragelonne 'integral', but it's probably something different. I hope they'll be closer to the original novels. Well, even if they don't, things should get back on track after ASoS.

Thirded on those pictures. The King's Landing one is astonishing, with the city and the keep looming gargantually in the background.

Amazing! I agree the Wall picture is truly mesmerizing.

This art makes me want to read the books all over again. I love how unspecific it is in regards to characters, so as to preserve the reader's image (although the ACoK is clearly Tyrion, if you don't picture his silhouette as somewhat resembling that, then I think the whole book thing isn't for you), but still offering breathtaking views of the world that will definitely inspire potential readers to pick it up at the bookstore.

Thanks for posting this.

Ben : Bragelonne isn't the publisher of ASOIAF. It's Pygmalion who split all the books.