UFO movie will now be first in a trilogy

In a prior post I commented on plans to develop Gerry Anderson's classic 1970 TV series UFO as a movie. In a new interview, the director, Matthew Gratzner, has indicated their plans are now radically more ambitious for the project. 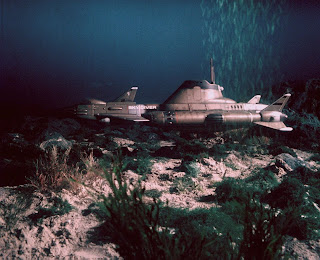 Skydiver, a possibly somewhat inefficient submarine-launched jet aircraft, but very modest by Anderson's normal standards of unnecessarily complicated vehicles.
The project is now envisaged as a trilogy. The first movie sounds like it will borrow heavily from a storyline in the series about pilot Paul Foster (Joshua Jackson, the only confirmed castmember so far) stumbling across the SHADO organisation and then joining it. The trilogy's storyline is under wraps but comments in the interview suggest it will broadly follow the series arc, in which SHADO gradually uncovers more information about the aliens and their technology and their goals, with a view to eventually defeating them (radical, I know).

Also encouraging is news that after relocating the action to the USA, the latest draft of the script has re-set it in the UK, with either Pinewood or Shepperton earmarked to stand in for SHADO's secret HQ underneath a film studio. The movie will also favour miniatures for the effects sequences, only going digital for sequences that would otherwise be impossible. After Moon recently doing something similar, could we be seeing the start of the long-prophesied CGI backlash? It sounds like important SHADO vehicles like Skydiver will still be used, but no word yet on the iconic Interceptors or the SHADO ground APCs.

No word on the casting of Commander Straker yet, although, as with the original series, he will still be an American. Gratzner states that he favours an international cast for the movie, and has resisted turning any of the male characters into women to increase the number of female roles in the story. However, several of the female characters, including Colonel Lake and Lt. Ellis, will likely have bigger roles than in the series. The director states that have favours Ali Larter (from Heroes) for the role Colonel Lake, which I must admit I'm not sold on. More amusingly, apparently there is an ongoing creative debate about whether the Moonbase technicians will keep their purple anti-static wigs. I suspect he might lose this one, but it's good to know they put up a fight.

And yes, Gerry Anderson will be involved as a consultant on the project. The first movie is expected to film next year to be a major 2011 release.
Posted by Adam Whitehead at 21:27