Following the defeat of the sorceress Nimueh, life in Camelot has returned to normal for young Merlin, manservant to Prince Arthur. Meanwhile, King Uther's ward, Morgana, is suffering from nightmarish dreams and visions. When it appears that only outlawed magic can give her the peace she seeks, Morgana is forced to rethink her allegiances. The Great Dragon, imprisoned beneath Camelot for twenty years, now demands that Merlin fulfil his oath to free him from his chains, but Merlin is no longer sure if he can trust the creature as he once did. The arrival of a skilled female warrior signals a transformation at Camelot as treason is unleashed and the castle is threatened with destruction from within and without. 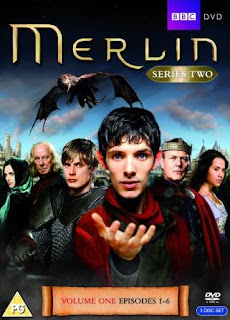 Merlin's first season was a fairly likable show, if quite lightweight. As a family show airing at 6pm on a Saturday night and aimed squarely at the Doctor Who audience (and thus having to be suitable for all ages), it was never going to really depict the darkness and mythical power of the Arthurian legends in full force, annoying historical and legendarium 'purists', whilst other viewers felt that even given the show's limitations it wasn't really being as original and interesting as it could be (the show repeatedly pulling punches that, for example, Doctor Who wouldn't hesitate to follow to their end).

This problem is both alleviated and exasperated by the second season. The producers long ago claimed to have a planned five-season story arc, and if this is true the second season should be when more of this grand plan comes into view. In a traditional five-act story, the second is the 'rising action' following the first season's introduction of the characters and premise. To some extent this is true of the second season of Merlin. More of the show's backstory is explored, and by the end of the season it does feel like the premise has been shaken up somewhat and more of the overall shape of the series is becoming clear. At the same time, the show repeatedly continues to pull its punches and not follow through on much-needed story and character developments. By this point Merlin should be a much more proactive force in the story instead of continuing to just react to things happening around him, and the introduction of a new villainess to replace Nimueh from the first season is initially impressive but rapidly becomes slightly tedious when it turns out she's simply Nimueh Mk. II, looking magnificently evil whilst staring into scrying devices and carrying out magical plots to destroy Camelot only to be defeated and walk away muttering darkly. Fortunately, Emilia Fox is a vastly superior actress to Michelle Ryan and the writers take her story at the end of the season in a very different direction, meaning it isn't quite as dull as it could have been.

Angel Courby as Guinevere has a bit more to do this season as she is given her own storyline as the Arthur/Guinevere relationship starts to get going. Surprisingly, Katie McGrath has significantly less screen-time than last year. When she is the focus of the episode, she does good work and Morgana's character does develop a lot, but she's also not in several episodes at all and in several more has nothing to do except complain about headaches. Given that she was one of the best actors in Season 1, it's surprising that she falls so much into the background in Season 2, despite her increased importance to the overall storyline.

On the plus side, the series picks up a lot in its second half (similarly to last year, actually) with a powerful confrontation between Morgana and Uther and another between Arthur and his father showing how these young actors have developed, with both McGrath and Bradley James going toe-to-toe with Anthony Stewart Head in a convincing manner. Colin Morgan is also more accomplished as Merlin this year, and handles the dramatic scenes better than last. Richard Wilson continues to give able support, and Head's depiction of an Uther slightly losing his composure and conviction in the latter part of the series is superb. John Hurt as the voice of the dragon also delivers an excellent vocal performance as the dragon's mentor-like relationship to Merlin disintegrates and they become increasingly suspicious and manipulative of one another.

After some ropey episodes including one where a shape-changed troll snogs Uther (as bad as it sounds), the season comes to a genuinely exciting three-part conclusion. Joseph Mawle (soon to be seen as Benjen Stark in HBO's Game of Thrones) joins the cast as a charismatic warlock and leader of a band of sorcerers (including Mordred, returning after his appearance in Season 1) opposed to Uther's rule who wins over Morgana to his cause. Morgause (Emilia Fox) then unleashes a plot that comes close to destroying Camelot. In order to defeat the plot Merlin has to carry out a number of heinous and morally dubious acts which saves the castle but results in the deaths of many innocents. In the final, unexpectedly epic (and CGI-laden) episode Merlin tries to make amends, only to suffer a personal tragedy in the process.

This last run of episodes isn't quite as much of a game-changer as it initially appears to be (I foresee some falling back on the established format next season), it does get the pieces moving towards their traditional places in the legend. The actors and writers up their game significantly, and an undercurrent of darkness and moral ambiguity not really seen before becomes more apparent. Whilst the second season isn't as much of a step forward as might be desired, it is nevertheless an improvement over the first season.

Merlin: Season 2 (***½) is available on DVD in the UK in two volumes. A third season has been commissioned and will start airing at the end of 2010.
Posted by Adam Whitehead at 23:43

The first season aired here in the US I think over the summer and I enjoyed. My only real problem was the casting of Guinevere was way off. IMHO, she wasn't exactly a beauty that could destroy a kingdom.