Benioff and Weiss line up first post-GAME OF THRONES project

David Benioff and D.B. Weiss have confirmed that they are planning their first project for when Game of Thrones wraps. They have made a deal with Fox to write, direct and produce Dirty White Boys, an adaptation of a 1995 novel by Stephen Hunter. 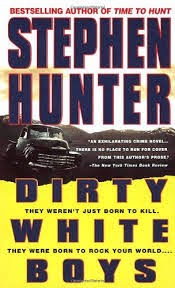 Recent statements by Benioff, Weiss and HBO have indicated that Game of Thrones will last for seven seasons, with HBO greenlighting the fifth and sixth seasons earlier this week. At launch events for the series it appeared that eight seasons was briefly back on the table, but Deadline are reporting that seven still seems to be the more likely option. Because of the all-consuming nature of working on GoT (with the writers moving from production to post-production to writing to pre-production without a break), the new film project will have to wait until the series is done. However, the news is a sign that Benioff and Weiss are starting to look at a post-GoT future.
Posted by Adam Whitehead at 09:45

Great book. I hope the dynamic duo hold no punches like the book does. The whole Aryan alpha male thing is exposed in it's gritty nastiness, and it would be shocking to see it on screen, especially the prison scenes. These guys would be the right ones to do it after GOT. A great crime story too.