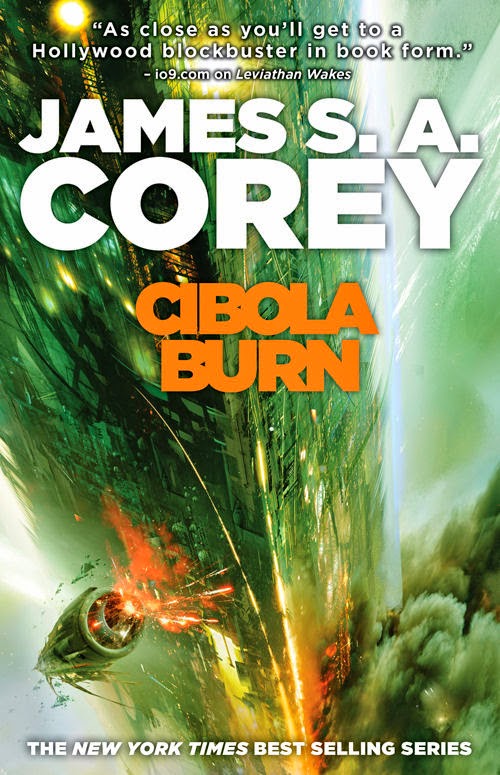 The Expanse consists of three published novels to date (Leviathan Wakes, Caliban's War and Abaddon's Gate), with the fourth book, Cibola Burn, due in June. There are also several short stories and novellas available in the setting. The author, James S.A. Corey, is a pen-name for fantasy author Daniel Abraham and Ty Franck, whose day is being George R.R. Martin's assistant.

Mark Fergus and Hawk Ostby (Children of Men, Iron Man) are attached as writers, executive producers and probably show-runners, with casting and the hiring of directors due to start soon.

"The Expanse is epic in scale and scope and promises to be Syfy's most ambitious series to date," Syfy president Dave Howe said. "Bringing this coveted book franchise to television with our partners at Alcon and the Sean Daniel Co. is a giant win for Syfy, reinforcing our overall strategy to produce bold, provocative and compelling sci-fi fantasy stories. The Expanse joins a killer lineup of high-concept, high-quality series, along with recently announced original projects Ascension, 12 Monkeys, the renewal of Helix, and the soon to premiere Dominion."

This is interesting news. SyFy's commitment to returning to proper SF after years of cheesy B-movies and pointless repeats of wrestling is welcome, although so far not exactly paying off: Helix in particular is a dreadful television series. But with the right cast and crew, The Expanse (with its budget-friendly claustrophobic starships and space stations) could be done very well. I'd like to see a more accomplished space opera series on screen, like The Night's Dawn Trilogy, The Revelation Space Series or The Gap Series, but those would all be bigger-budgeted propositions and will probably have to wait until someone with the resources of HBO (or even AMC, Starz or Showtime) decide they want their own big-budget SF series.
Posted by Adam Whitehead at 09:33

This is wonderful news indeed: I had heard about the proposal to turn the trilogy into a series, but this is the real thing.
Yes, there is the not-so-little worry about SyFy's involvement, whose tastes and operational modes are not exactly... well, balanced. But hopefully, with the right casting and a good writing department, this could turn out to be a great show worthy of a great series of books.

Hope they don't cut corners with CG/costumes for belters and non 1g environments.

Curious as to why you mention The Night's Dawn trilogy over The Commonwealth Saga. Not complaining, but personally I feel CS would make for better (and easier) television to produce.

NIGHT'S DAWN is a space opera from the start whilst COMMONWEALTH transitions to one gradually. NIGHT'S DAWN is also longer (unless they'd also do VOID and FALLERS afterwards), more epic and, for me, has more interesting characters. The premise is a bit more 'out there' though, but that could even work for marketing purposes. I must also admit to simply finding the Confederation universe more interesting; though I like the CS as well, it did feel like PFH was sometimes reaching with his depiction of future tech just to be different to what he did in the NDT.

Far more affordable than either, of course, would be the GREG MANDEL books, but I personally find the notion of Peterborough being the capital of a post-climate-catastrophe UK to be far more implausible than anything else he's ever written.

I agree with Adam that The Night's Dawn trilogy would make a better TV series, especially with it's mixture of space opera and horror in 'The Reality Dysfunction'. It also has a more defined set of characters in the protagonist and antagonist roles with Joshua Calvert, Quinn Dexter etc. Plus Voidhawks are just cooler.

I can see how it would be easier to film the Commonwealth books but when the whole Void thing is introduced the series goes downhill a bit.

If SyFy (stupid name) wanted to do something a bit cheaper though maybe they could try the Vatta's War series?

The Expanse on TV. I simply don't trust SyFy - they have no credibility. I'll hope for the best but expect the worst. - Ian