George R.R. Martin on A KNIGHT OF THE SEVEN KINGDOMS and the future of Dunk 'n' Egg

George R.R. Martin has expanded on the forthcoming omnibus re-release of his three Song of Ice and Fire novellas featuring the adventures of the hedge knight, Ser Duncan the Tall, and his squire Egg. 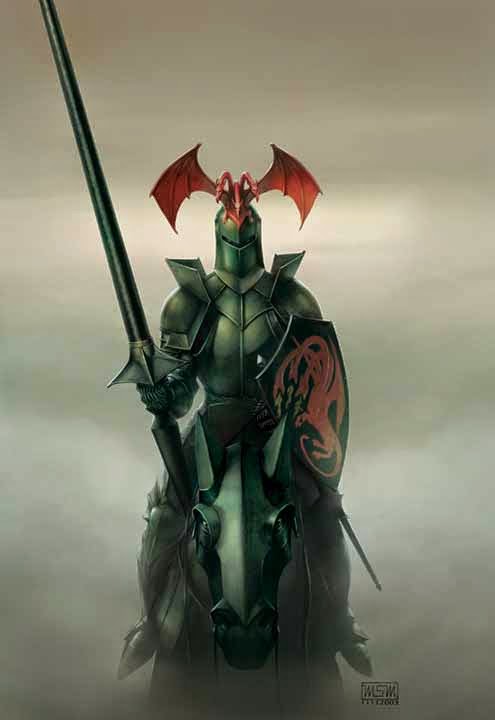 A Knight of the Seven Kingdoms is already available now in several countries, but Martin confirms that the UK and US releases have been delayed so they can be enhanced with artwork. Artist Gary Gianni is working on a substantial number of illustrations which will be added to The Hedge Knight, The Sworn Sword and The Mystery Knight for their omnibus appearance. The book is still expected to appear in late 2015.

Martin also clarifies what had been informally known for some time: that HBO do not have the rights to the Dunk 'n' Egg novellas and would have to buy them in a separate deal (the same is true for The Princess and the Queen, The Rogue Prince and historical material like Robert's Rebellion). However, HBO's Game of Thrones rights do include the screen rights to all material set in Westeros, meaning that Dunk 'n' Egg can't be made anywhere else either. Martin does suggest that HBO adapting Dunk 'n' Egg is a possibility, but not for some considerable time.

GRRM confirms that the next story remains the so-called She-Wolves of Winterfell, although that won't be the final title, to be followed by The Village Hero, set back in the Riverlands. Neither of these stories will be worked on prior to him delivering The Winds of Winter, however.
Posted by Adam Whitehead at 20:03

Email ThisBlogThis!Share to TwitterShare to FacebookShare to Pinterest
Labels: a knight of the seven kingdoms, a song of ice and fire, george r.r. martin, hbo, news, the hedge knight

That agreement with HBO makes no sense. HBO's Game of Thrones rights include the screen rights to ALL material set in Westeros but not the rights to the Dunk 'n' Egg novellas?

I hope wertzone bloggers have seen the latest interactive map of Westeros. You can zoom in.

Yeah, removing all references to ASOIAF from D&E makes no sense at all, what makes them so great is the different view on Westeros they provide. Targaryens in power, the Seven Kingdoms in a time of peace (on the surface), all the Blackfyre backstory...