Miles Vorkosigan, in his guise as Admiral Naismith of the Dendarii Mercenaries, has been captured by the Cetagandans and imprisoned on a remote moon, along with thousands of other POWs. Vorkosigan finds a camp in the grip of chaos, with different groups of prisoners fighting amongst themselves and the strong preying on the weak. He has to somehow unite the prisoners before any breakout can be attempted...which is difficult to do when you have bones that shatter easily and no incentives to use. 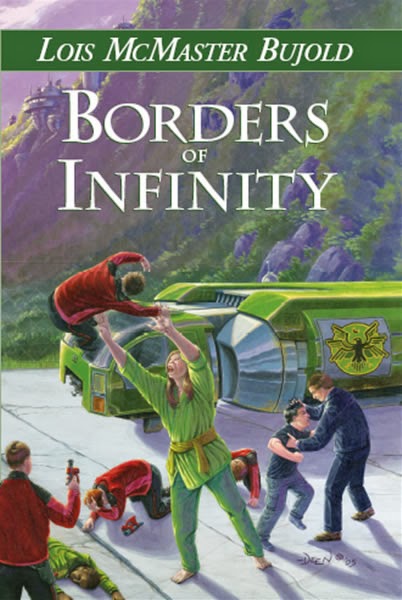 Borders of Infinity is another short novella featuring the character of Miles Vorkosigan, this time back with the Dendarii (after a break of several stories and books, in chronological order anyway) before being imprisoned by the Cetagandans. It's a fairly straightforward and entertaining story, basically involving Miles trying to set up a prison break but being confronted by problems with asserting his authority and making enemies who want to kill him, even if it means they never escape.

The story's slightness works against it, as does a muddled tone. Funny scenes - Miles being forced to walk around naked and working with a crazy religious nut to try to win over the soldiers - are contrasted against some of the darker and more brutal scenes that Bujold has written to date. Making such a juxtaposition work is possible, but Bujold fails to achieve it here.

There's also the problem of the story being bigger than its word count. The story could easily have been twice as long, but just as it's getting started it abruptly ends, and in a rather straightforward manner as well (although the fallout does at least get novel-length coverage, in Brothers in Arms).

Borders of Infinity (***) is readable and passes the time, but is again a fairly short and slight story that feels like it's a novel that's been truncated almost to the point of non-existence. A story that's more important for what it does (setting up Brothers in Arms) than what it is, then. It can be found in the Miles Errant omnibus (UK, USA).
Posted by Adam Whitehead at 13:42