Richard Morgan's novel Black Man (known as Thirteen in the USA) has been optioned as a feature film by the team behind the recent Johnny Depp vehicle Transcendence. 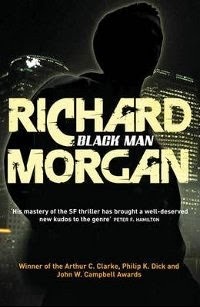 Transcendence producers Kate Cohen and Marisa Polvino are helming the adaptation, which is being written by Kenny Golde, the writer of Walking with the Enemy and a long-gestating film based on Isaac Asimov's The End of Eternity.

The novel was released in 2007 and went on to win the Arthur C. Clarke Award the following year. The book is set in 2107 and features a United States that has been torn apart into three separate nations by religious and political strife: the ultra-rich Pacific Rim, the fundamentalist Republic (aka 'Jesusland') and the liberal North Atlantic Union. Carl Marsalis, a 'thirteen' or genetically-engineered soldier hung out to dry when the war he was designed to fight ended, is recruited to help track down a rival thirteen who has gone on a rogue killing spree after visiting Mars. Carl teams up with a Turkish-descended policewoman, Svegi Ertekin, to track down the rogue thirteen.

With its no-holds-barred commentary on the state of America and its graphic violence, the book will not be easy to adapt to film whilst maintaining both its integrity and the high budget and adult rating that will be required to do it justice. This is a dark, brooding story which is singularly unfit to be turned into a summer popcorn blockbuster, so I'm interested in seeing how the producers tackle it.
Posted by Adam Whitehead at 09:22

Email ThisBlogThis!Share to TwitterShare to FacebookShare to Pinterest
Labels: black man, news, richard morgan, thirteen, this will probably suck but you never know

I'd prefer that someone get around to making the Altered Carbon film that's been proposed for the last few years but I'll take this.

Agreed for Elba. As for calling the setting you could use the current US election as the tie in to the US split as outlined in the book.

Dude, that's is a scary thought. But not implausible. Which is what makes it scary.
That would make a good social commentary sort of movie. (Like all good sci-fi)