The Ocean at the End of the Lane by Neil Gaiman

A middle-aged man returns to his home for a funeral, only to be drawn back into the long-forgotten events of his childhood, when he travelled through an ocean, visited another world and brought back something that did not want to leave. 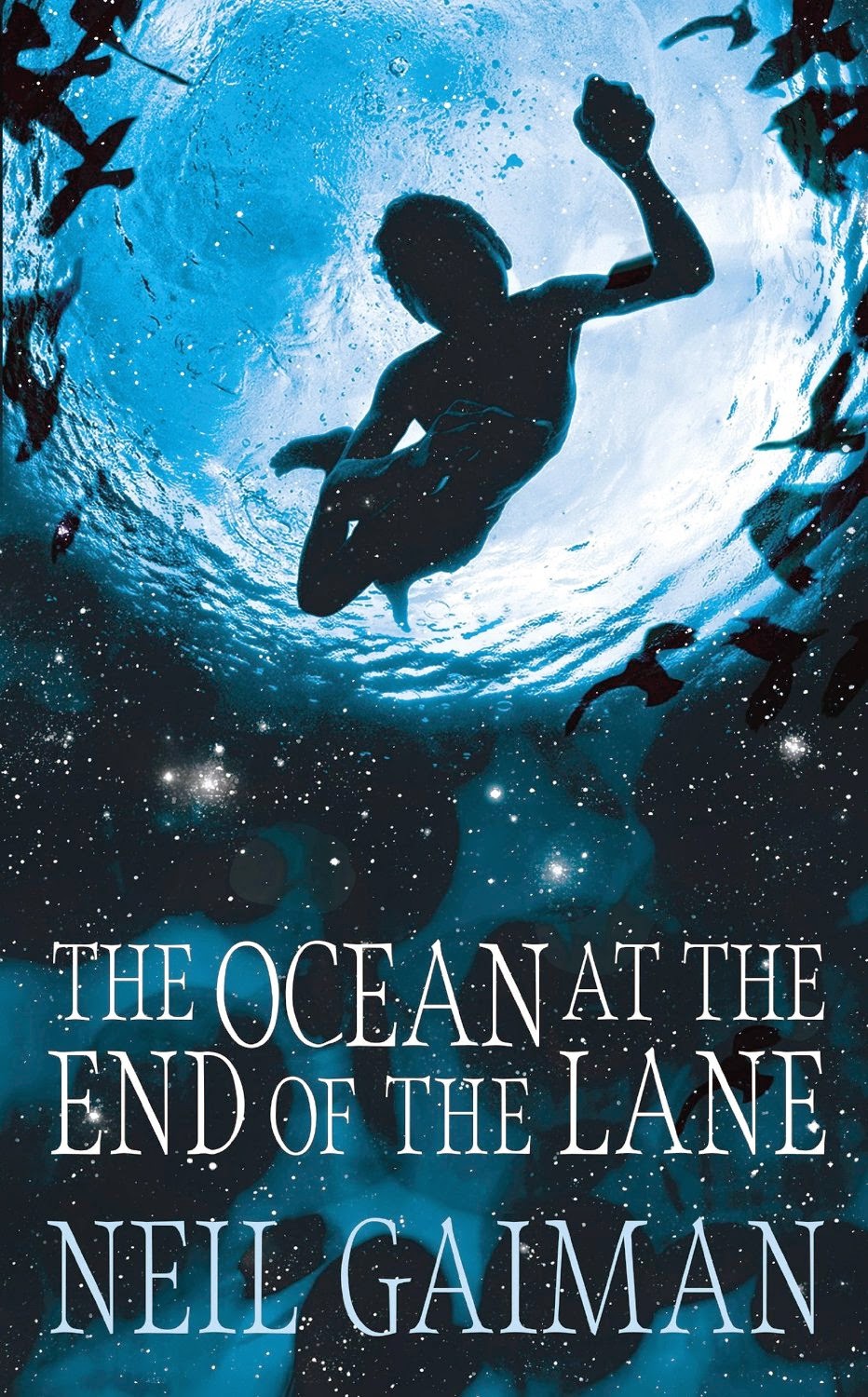 The Ocean at the End of the Lane is Neil Gaiman's first novel for adults for eight years. It started off as a novella and grew larger than he first intended, though at 250 pages it's still on the short side for a novel. This is a book that touches on a number of themes, such as nostalgia, memory (and how it is mutable) and how a child's perception differs from that of an adult's. The book also ties in with some of Gaiman's other work, bringing in the Hempstock family from Stardust and The Graveyard Book. This is a novel that operates primarily as a mood piece, evoking the feeling of a childhood idyll and then darkening it with a nightmarish intrusion from another place. It's a classic trope, taking the idea of childhood as a sacrosanct time of warmth, fun and protection and then violating it with a force of darkness and evil.

That said, it's a story that Gaiman seems to shy away from exploring fully. Our unnamed protagonist has a rather capable of group of allies in the form of the Hempstock family, who know everything that's going on and have a solution for every problem that arises. It's difficult to build tension when your main character has a group of powerful magic-users on speed dial (effectively) to call upon at every turn. The book's structure is also odd: the novel is short, but it's quite a long time before the evil force arrives and it departs some time before the end of the book. It's almost like Gaiman wanted to write a moody piece about childhood but then decided he needed some sort of existential threat to be introduced and defeated because, well, it's a fantasy novel.

It's all well-written, as you'd expect, and there's some very nice moments of humour, characterisation and even genre-bending (the Hempstock occasionally evoking atomic physics and dark matter to explain magical events). But it's also a slight novel, with an odd structure and some fairly straightforward plotting. Gaiman seems to have always struggled a little with plotting in his novels, oddly as it's something he does very well in his comic and TV work, and Ocean doesn't address that issue.

Email ThisBlogThis!Share to TwitterShare to FacebookShare to Pinterest
Labels: neil gaiman, the ocean at the end of the lane

So, the wait for the undisputed Gaiman masterpiece novel continues

AMERICAN GODS is good, but it feels very much like a condensed novel-length take on SANDMAN, and is a little too derivative of it. SANDMAN is certainly Gaiman's masterpiece, but I've always thought he had at least one genre-defining novel in him. He's not quite hit it yet.

My thoughts exactly. Gaiman's prose, as you said, is always beautiful, and deserving of the praise he gets for it, but this felt like a book he wrote because he felt like he should write, because he had approximately enough material for it, than one he wrote because the story needed to be told. It reminds me a lot of the recent work of another of my favorite writers in that way: Michael Chabon's Telegraph Avenue feels somehow...off the cuff, in comparison to his earlier work.

I love The Graveyard Book and Neverwhere, the latter easily being my favorite of his. It's ironic, given what you said about his superior plotting ability when it comes to screen work, that Neverwhere the novel was adapted from a television serial.

First review I've seen that seems to mesh with what I read. I think the reason I merely enjoyed this book is the Sandman - the deities are too reminiscent of the Endless, and without the fantastic drawing, and his prose didn't seem capable of conjuring the emotion (I thought) he wanted the readers to feel.

It IS weird that the plotting in Gaiman's novels is so spotty, isn't it? Sandman was obviously inspired by Alan Moore's Swamp Thing in terms of narrative structure--a series of "nodular" stories, single issues that were part of larger arcs that were in turn part of the overall storyline, and in some cases the single issues contained multiple stories--and I think having that goal of having to tell something resembling a complete story in 22 pages really helped him keep the focus tight. One of the things that's so great about Sandman is that it's so jam packed with good ideas, interesting worlds and characters and fanciful concepts, because Gaiman can essentially "change the channel" anytime he feels like it. Without that structure (and I'm not sure why he abandoned it--he could totally have kept something similar for his novels, and almost did in American Gods) I feel like his ideas wear themselves thin before he's able to really put a bow on them.

Of course, to me TOATEOTL is an example of Gaiman's ideas not even being interesting enough to support a story in the first place. The Evil Nanny stuff is creepy, but the underlying mythology of the story didn't make much sense to me, and it wasn't very compelling--the flirtation with the Hempstock's magic being some kind of super-science piqued my curiosity, but that wasn't developed enough. Otherwise it's sort of vaguely Lovecraftian and ambiguous in an unsatisfying way.

This is a little late, but - I think part of this issue is that much of what the child protagonist relates isn't what actually happens. In the novel(lette), we're witness to how the protagonist copes with a death, a divorce, his father cheating (and worse), and a "nanny" who seems to be a literal monster. So, for him, the Hempstocks are magical because they save him from the worst of it.

It's not a fantasy novel in the traditonal sense.