A Song of Facts and Figures: A Clash of Kings 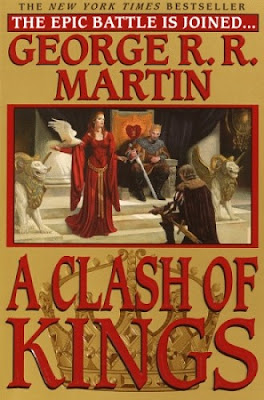 As discussed previously, A Clash of Kings was not supposed to exist in George R.R. Martin's original plan for the series. This plan was for a trilogy consisting of the novels A Game of Thrones (focusing on the War of the Five Kings), A Dance with Dragons (focusing on Daenerys) and The Winds of Winter (focusing on the Others), with each novel maybe coming in at 700-800 manuscript pages each.

Instead, when Martin realised he was approaching 1,400 manuscript pages and wasn't even halfway through his original storyline for A Game of Thrones by itself, he realised he had a problem on his hands. He found suitable end or cliffhanger points for the existing characters and storylines and submitted this material as A Game of Thrones. The remaining 300-odd manuscript pages were held back for the second volume. It appears that for a time Martin considered rolling this material into the original planned second book, A Dance with Dragons. As late as the summer of 1996, on the eve of A Game of Thrones's publication, marketing materials and blurbs were referring to Dragons as the second volume of a trilogy. Shortly after that point Martin had to concede defeat and announce a new plan: A Song of Ice and Fire was going to be a four-book series.

The new second volume gained the title A Clash of Kings. Using the 300-odd pages inherited from A Game of Thrones, work on A Clash of Kings proceeded relatively speedily. However, the same problem that afflicted Thrones now cropped up in Kings. Martin would write material for one POV character and then switch to another. However, he found himself writing large amounts of material for some characters and getting much further ahead in chronology, so then had to stop and skip back to catch up the other characters. He also made the decision to expand the cast of POV characters. His original plan had been to solely use the seven surviving characters from A Game of Thrones, but for the second volume decided to add Theon Greyjoy and Davos Seaworth to the character roster.

By early-to-mid 1998, the book had ballooned in size just as Thrones had. Martin, once again, had to make the decision to split the book and hold back material for an additional volume. This time, he also wrote a more detailed outline. This new outline (which has never been seen publicly) suggested to him that the whole series would be longer than originally planned. What had been the first novel was going to be three, whilst the originally-planned final book would now be two. As a result, the series leapt from four volumes to six: A Game of Thrones, A Clash of Kings, A Storm of Swords, A Dance with Dragons, The Winds of Winter and A Time for Wolves (a title he disliked, but a better one escaped him for the moment).

During the writing of A Clash of Kings, Martin also received an invitation from legendary science fiction and fantasy author Robert Silverberg to contribute to a new anthology work he was planning, entitled Legends. This book would feature new short fiction set in some of the biggest and most popular fantasy worlds ever created. The book would feature new stories in the Discworld, Dark Tower, Dragonriders of Pern and Wheel of Time worlds by Terry Pratchett, Stephen King, Anne McCaffrey and Robert Jordan respectively, among many others. Martin decided to contribute a prequel to A Song of Ice and Fire, a story called The Hedge Knight set eighty-nine years before A Game of Thrones and featuring the adventures of Ser Duncan the Tall and his squire, Egg. The story was a big hit and reviewed as one of the highlights of the collection, convincing Martin to write sequels.

A Clash of Kings was finally published in November 1998 in the UK (the American edition had to wait until February 1999). At 1,184 manuscript pages, it was noticeably larger than A Game of Thrones and ended on a series of cliffhangers. It also featured some of the most iconic scenes in the series, such as Daenerys Targaryen's surreal adventure in the House of the Undying and the epic clash of armies and wildfire in the Battle of the Blackwater. The novel's arrival also coincided with the appearance of the earliest fan websites and forums dedicated to the series, which were soon eagerly debating where the series would go next.

For Martin, again he had written far ahead of the material he had just published and had several hundred manuscript pages in progress for the third volume in the series, A Storm of Swords. 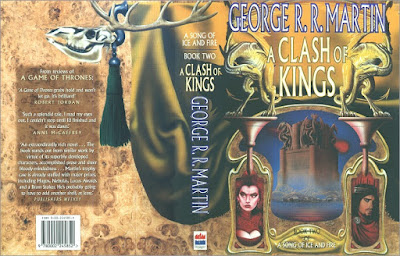 Cover Art
After the cover shenanigans surrounding A Game of Thrones, A Clash of Kings had a far easier time of things. Stephen Youll created the American artwork and Jim Burns the British, both following the same styles laid down for the first book.

Fan Theories
A Clash of Kings was the first book in the series to be discussed in-depth online after publication, and as such it is notable that fan theories such as "R+L=J" (the notion that Jon Snow is actually the son of Prince Rhaegar Targaryen and Lyanna Stark, not the bastard son of Eddard Stark at all) and that Aegon VI Targaryen had survived the Sack of King's Landing (following the "mummer's dragon" appearance in Daenerys's vision) both gained widespread credence following the novel's publication. Fans were gratified when the latter theory, at least, was proven with the publication of A Dance with Dragons thirteen years later.
Posted by Adam Whitehead at 19:57

Email ThisBlogThis!Share to TwitterShare to FacebookShare to Pinterest
Labels: a clash of kings, a song of facts and figures, a song of ice and fire, bantam spectra, george r.r. martin, harpercollins voyager