Komarr, second world of the Barrayaran Empire, is slowly being terraformed over the course of centuries. Key to the terraforming effort is an orbiting soletta, a massive mirror which increases the amount of sunlight being directed onto the surface. When the soletta is damaged by a spacecraft collision, the future viability of the planet is put in jeopardy. Newly-anointed Imperial Adjudicator Miles Vorkosigan is sent to investigate whether this was an accident or deliberate sabotage. 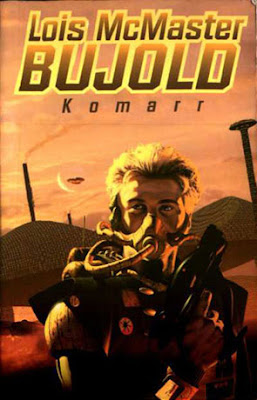 Komarr is the first novel in the series to focus on Miles Vorkosigan in his new role as an Imperial Adjudicator. Bujold wanted to freshen things up by taking Miles away from his support network of thousands of loyal soldiers and a fleet of powerful starships and it's a move that could have been mishandled. The loss of most of Miles's supporting cast from the Dendarii Mercenaries (who only warrant cameo appearances and the occasional mention from now on) is a blow and it was initially unclear if Miles as a (mostly) solo investigator is a compelling enough idea to replace the military SF feel of the earlier novels.

Komarr lays those fears to rest. This a well-written, crisply-paced and masterfully characterised novel. Bujold develops a new POV character in the form of Ekaterin Vorsoisson, a young woman and mother married to a difficult husband involved in the terraforming project. Komarr has the reputation of being a "romance novel", with Ekaterin brought in as a serious love interest for Miles, whose relationships up until now have mostly been more like casual flings and friends-with-benefits arrangements. However, it would be a serious mistake to dismiss Komarr as a light or frivolous book because of this.

Instead, Komarr is a serious book about adult relationships, motivations and fulfilment, and it layers those themes into a thriller storyline involving betrayal, murder and intrigue. Bujold has said she enjoys writing about "grown-ups", and the romance in the novel is between two adults who have been through the wars (literally and figuratively) and find something in each other they like and respect, but have to overcome personal issues before they can turn that mutual attraction into something more tangible. It's an approach rooted in character that works effectively without overshadowing the SF thriller storyline, which has all the required twists and turns of a solid mystery before Miles and Ekaterin can resolve the problem.

Komarr (****) is a solid entry in The Vorkosigan Saga which sets the books on a new course and does so effectively. It is available now as part of the Miles in Love omnibus (UK, USA).
Posted by Adam Whitehead at 14:19