A Song of Facts and Figures: A Game of Thrones

After seeing some recent online discussions about A Song of Ice and Fire - the book series upon which the hit HBO series Game of Thrones is based - I thought it would be useful to provide some statistics and information about each book in the series. 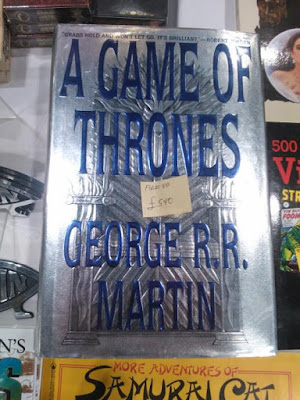 An American first edition of A Game of Thrones spotted by myself at Worldcon in London, August 2014. This edition was retailing for £540 (approx. $850). I passed.

A Game of Thrones

George R.R. Martin started writing the first volume in the series, A Game of Thrones, in the summer of 1991. He conceived of the chapter where Bran watches Gared being executed and then finding the direwolf pups in the snow whilst working on a separate SF novel, Avalon. Martin was originally unsure if this was a novel, novella or a series. He wrote several additional chapters, initially deciding that this would be a "realistic" fantasy novel featuring no magic or supernatural elements, just set in a fictional world. However, his friend and fellow writer Phyllis Eisenstein convinced him this was the wrong path to take and, as he later put it, talked him into "putting the dragons in" (A Storm of Swords is dedicated to her).

Martin had completed approximately 100 manuscript pages before he received word from Hollywood that a TV pilot script he had written, called Doorways, had been picked up by ABC. Martin returned to Hollywood for much for 1992 and 1993 to work on the project. In the event, a pilot was produced but never aired and ABC passed on the series. During this time Martin continued to develop ideas for the novel and its characters. By the time he had returned to Santa Fe and resumed work on the novel in 1993, he had expanded the series to a trilogy, provisionally consisting of the novels A Game of Thrones (focusing on Eddard Stark and the War of the Five Kings), A Dance with Dragons (focusing on Daenerys) and The Winds of Winter (focusing on events at the Wall).

By October 1993, A Game of Thrones consisted of 173 manuscript pages and thirteen completed chapters. Martin also, unusually for him, prepared a brief outline of how he envisaged the story developing. This outline, made public early this year, is extremely different to the story that we ended up with (not to mention being much shorter), but some of the bare bones remain.

The outline, prepared to help sell the trilogy to potential publishers, proved highly and rapidly successful: HarperCollins in the UK picked up the trilogy for £450,000 ($662,000 in 1994 money) in February 1994. Bantam Spectra picked up the American rights around the same time.

It is unclear when A Game of Thrones was completed, because Martin originally did not envisage the novel finishing where it did. Originally, it appears that Martin planned for a rather shorter and more concise version of the War of the Five Kings to take place, with the first novel expected to end around the time of the Red Wedding. However, this proved impractical during the writing. When he passed 1,300 manuscript pages, Martin realised that the first novel would have to be split into two. He found suitable endpoints for the first novel, which ended up at 1,088 manuscript pages, and submitted this as the first novel in the series, A Game of Thrones. The remaining 300-400 pages were held back for the second novel, now provisionally entitled A Clash of Kings. This split seems to have taken place in late 1995 or early 1996.

Blood of the Dragon, a self-contained novella consisting of all of the Daenerys chapters from A Game of Thrones. Published in Asimov's in July 1996, it won the series a Hugo Award in 1997. Note in the blurb that A Dance with Dragons is still envisaged as the second (!) book in the series.

For A Game of Thrones, both the US and UK publishers chose similar release strategies. Epic fantasy was big business at the time and an established, respected SF author of many years standing dipping his toe into the genre was seen by both publishers as a good marketing opportunity. In the American market, the chapters featuring Daenerys Targaryen were extracted from A Game of Thrones and turned into a stand-alone novella called Blood of the Dragon. This was published in Asimov's Science Fiction in July 1996. It later won the Best Novella Award at the 1997 Hugo Awards, the only Hugo the series has won for fiction (although its TV spin-off, Game of Thrones, has now won three), and helped drum up American interest in the novel. 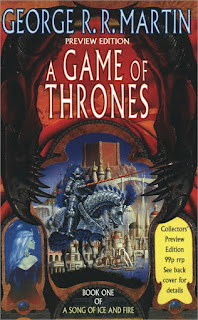 The pre-release preview novella released by HarperCollins Voyager, circa May/June 1996 and sold in bookstores for 99p.

In the UK, HarperCollins Voyager published the first few chapters of the book as a stand-alone novella, retailing at 99p. Voyager seemed to cunningly position this so readers picking up the then-latest Wheel of Time hardcover, A Crown of Swords (released in May 1996), might be tempted by this sneak peek. I certainly remember it being available at the same time, although I chose not to pick it up at the time (otherwise I may have ended up getting involved in the ASoIaF fandom years earlier than I did, which would have been interesting).

Cover Art
The first edition of A Game of Thrones was published with a silver, reflective foil cover prepared by Tom Hallman and a debatable blue-purple typeface. It was not a huge success, and initial American sales were disappointing. The British edition, with more striking cover art by Jim Burns, was more successful. Sales of the book did not really start taking off until the US paperback, with new cover art by Stephen Youll, was released in 1997.

Sales of the book were also helped by a number of prominent fantasy and science fiction authors providing cover blurbs. Katherine Kerr (known for her Deverry novels), Julian May (of the Galactic Milieu sequence), Raymond E. Feist (of Riftwar fame), Janny Wurts (known for The Wars of Light and Shadow) and Anne McCaffrey (author of the Dragonriders of Pern series) all provided quotes but the most influential (according to both Martin and his publishers) was that given by Robert Jordan, author of The Wheel of Time. The Wheel of Time was the then-dominant epic fantasy series on the market and Jordan's blessing seemed to provide a noticeable boost to sales.

In 1998, Martin and Jordan both contributed short stories to Robert Silverberg's Legends anthology. Martin provided The Hedge Knight, the first of his Dunk & Egg novellas set ninety years before the events of A Game of Thrones, whilst Jordan contributed New Spring, a short story set twenty years before his Wheel of Time sequence. Martin pointed out that many readers picked up Legends primarily for the Jordan story and then read his tale, which inspired them to pick up A Game of Thrones.

Avalon?
George R.R. Martin has not revealed much about Avalon, the novel he abandoned to work on A Song of Ice and Fire. It was part of his Thousand Worlds setting, where his early novels Dying of the Light (1977), Windhaven (1981) and Tuf Voyaging (1987) were all set, along with a large amount of his short fiction (most of it collected in Dreamsongs). Avalon is the name of a planet in this setting, mentioned several times in the other books as being one of the more powerful and civilised planets in the Thousand Worlds, but nothing about the plot or characters of the book are known. 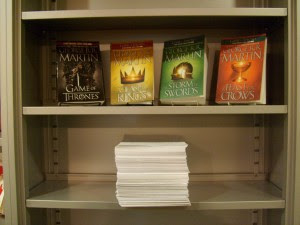 The completed manuscript of A Dance with Dragons.

* A Note on Manuscript Pages
As regular readers of Martin's blog will know, he often speaks about "manuscript pages" when talking about the length of his novels. This occasionally causes confusion, especially when he talks about The Winds of Winter being 1,500 pages long, as this leads people to expect a novel half again even the massive lengths of A Storm of Swords and A Dance with Dragons.

"Manuscript pages" refers to the number of pages the book takes up on Martin's word processor, an ancient (late 1980s vintage) piece of software called WordStar 4.0 running on an old DOS machine. All five books to date have been written on this machine, as (presumably) is The Winds of Winter. The published versions of the books vary in length immensely depending on font and margin size, and are inconsistent with one another. Martin prefers to refer to the manuscript page size as this remains uniform across all five published books to date.

Under this count, the novels are the following lengths:

Note that A Feast for Crows is 2,000 words longer than A Game of Thrones but occupies 25 fewer MS pages, likely the result the former having 27 fewer chapters and thus fewer page breaks than Thrones.

Next up (natch): A Clash of Kings
Posted by Adam Whitehead at 21:26

Here's a big spoiler for both Game of Thrones and Winds of Winter.

Don't hold your breath for Avalon. I love Tuf Voyaging but at the rate Martin is going, it would be 20 years before we ever sees it (if that).