A Song of Facts and Figures: A Storm of Swords 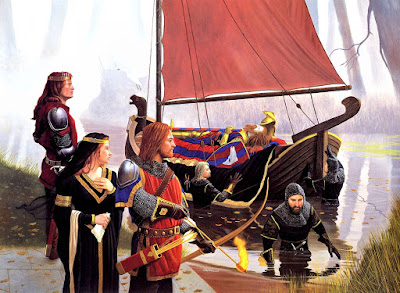 As with A Clash of Kings, A Storm of Swords was not supposed to exist in George R.R. Martin's original plan for A Song of Ice and Fire. The original plan was for a trilogy consisting of the civil war-focused A Game of Thrones, the Daenerys-focused A Dance with Dragons and the North-focused The Winds of Winter. The original Game of Thrones was expected to cover not just the set-up for the War of the Five Kings, but the full struggle itself, culminating in the Red Wedding.

During the writing, Martin discovered that this wasn't really working. In the event it took three books and almost 4,000 manuscript pages (rather than the 700-800 he'd originally thought) to get through this material. Of course, this was a much-expanded version of the story he'd originally conceived with numerous differences. These included expanding the cast of POV characters in every book (Swords adds Samwell Tarly and Jaime Lannister to the roster), covering perspectives such as the ironborn in more detail than originally planned and bringing in many small-but-popular bit-part players absent from the original outline, such as Bronn.

A Storm of Swords was - and remains - the longest book in the Song of Ice and Fire sequence, but it was almost certainly the fastest-written (although it's impossible to be sure due to the heavy overlap of writing between Swords and A Clash of Kings). When A Clash of Kings was completed, hundreds of pages were left over for A Storm of Swords, including (according to some reports) Tyrion Lannister's complete story arc for the latter. Martin wrote like a man possessed through Swords, reportedly even cramming in some work over Christmas 1999 to help get the thing done as fast as possible. Martin reported that the book was completed in April 2000 and it hit the shelves in the UK in August, although it was actually on some bookshelves in the last week of July. For such a big book, this was a very rapid turn-around.

The reason for the sheer length of Swords was that Martin had made a crucial decision during the writing process. His original plan had been for weeks or even months to pass between chapters, so the characters would grow up a lot through the first book or two of the series. In the event this did not place, and between them the first three books in the series cover rather less than two years of time. Unhappy with the impact this had on some storylines (Martin, at least at one early stage, had considered a love triangle forming between a grown-up Arya, Jon and Tyrion as a plot point for the later books), Martin made a fateful and, in hindsight, unwise decision: there would be a "jump forwards" of about five years between A Storm of Swords and the fourth book in the series, A Dance with Dragons. As a result, A Storm of Swords had to conclude pretty much all of the storylines-in-progress so that Martin could pick them up again five years later, with either no cliffhangers or ones that could be easily explored later on in flashback. This required every story put in motion in A Game of Thrones to either be finished, cut off or plateaued by the end of Swords, put into stasis for five years until the next book could pick up on them.

On release, A Storm of Swords easily became the most critically-acclaimed book in the series. It was also the first volume to hit the New York Times bestseller list and was nominated for the Hugo Award for Best Novel, a prize it missed out on to Harry Potter and the Goblet of Fire. With the book completed, Martin set to work on A Dance with Dragons, unaware that this book was going to take slightly longer than its predecessors to get on the shelves. 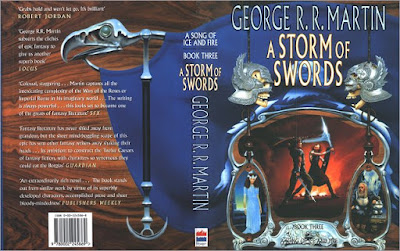 A Plethora of Pages
A Storm of Swords is one of the largest fantasy novels ever published. The book is over 424,000 words in length and there are very few notable SF or fantasy books which are larger. Here are a few of them:

The Stand: Stephen King's apocalyptic SF/horror epic clocks in at 462,000 words.
The Naked God: The concluding volume of Peter F. Hamilton's Night's Dawn Trilogy is 469,000 words long, making it comfortably the largest space opera ever written.
The Lord of the Rings: J.R.R. Tolkien's fantasy saga - the whole thing - tops out at 473,000 words.
To Green Angel Tower: The final book of Tad Williams's Memory, Sorrow and Thorn trilogy is a mind-boggling 520,000 words in length, making it one of the longest single novels in the English language. Memory, Sorrow and Thorn was a key influence on A Song of Ice and Fire, and several references to it can be found hidden in Martin's work.
Posted by Adam Whitehead at 21:07

Email ThisBlogThis!Share to TwitterShare to FacebookShare to Pinterest
Labels: a song of facts and figures, a song of ice and fire, a storm of swords, bantam spectra, george r.r. martin, harpercollins voyager

I have an original To Green Angel Tower in hardback. It's genuinely like leafing through the Bible, the pages are THAT thin :) Looking forward to the sequel series too!

What about "Otherland" by Tad Williams -- he claims it was supposed to be one volume that had to be split into 4 ... one wonders the total word count for that :-)

Otherland was conceived as a four-book series from the very beginning. He learned from his experiences with MS&T.

I wonder, had the 5 year jump never been a thing, would ASoS have been shorter and more in line with the size of the first two? Maybe finish soon after the weddings?

Disappointed about the one you forgot, since you're one of the few people who I think knows it exists...

Mary Gentle's "Ash: A Secret History". Reputedly it's around 500k, but as I don't have an electronic copy I couldn't say. The paperback is over 1,100 pages. Don't know if it can beat TGAT, but I'm pretty sure it beats ASOS.

Talking of word counts, there was a great Q&A I was just reading from yonks ago with Charles Stross that contained this gem:

I've sometimes wondered if the rise in word count was also driven by the rise of the word processor ...

Yes, that's definitely driven word counts up; an editor of my acquaintance says submitted manuscripts bloated by around 20% during the 1980s, and it was very visibly associated with manuscripts that came off a word processor (which can be distinguished from ones off an electric typewriter -- margins and headers/footers are more consistent, for one thing).

True, to some extent. LotR was of course written in longhand and Neal Stephenson writes his novels longhand first, typing them up only later, and they're all massive books. But I think a combination of wanting to keep costs down and writers having to crank through typerwriters did help keep books shorter until the 1980s and 1990s.

GRRM's writing computer (a mid-1980s DOS PC) and word processor (WordStar 4, released in 1987) are also both about 30 years old and labourious by modern standards to use: you have to enter snippets of code before and after every word you want to bold or italicise, for example. It's not as speedy as a WYSIWYG word processor.