As hinted yesterday, Bethesda have indeed confirmed that Fallout 4 is on its way with a trailer:


The trailer confirms that the game will be set in Boston. Your character this time appears to be from Vault 111 and you will, once again, have a canine companion. We can assume that the game will be set in and around the city and out in the surrounding countryside. In Fallout lore, Boston is the home of the Institute (built in the ruins of MIT) and the capital of the Commonwealth, a new nation forged from the ruins of the old world. In Fallout 3 it was hinted that something was wrong in Boston, with androids escaping from the area to seek safety in Washington, DC. Fallout 4, we can assume, will expand on that storyline. 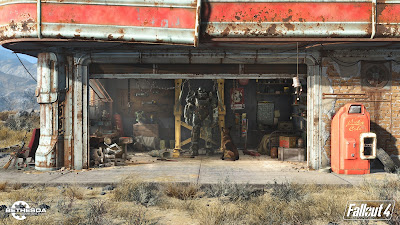 Fallout 4 will be exclusive to PC, X-Box One and PlayStation 4. However, this is surprising as graphically the game does not appear to be a significant improvement over New Vegas and Skyrim. The next-gen exclusive nature of the game may be down more to memory requirements. Previous games in the series were sorely constrained by the tiny amounts of memory available on the PS3 and X-Box 360, necessitating frequent loading times. Hopefully the greater power of the new machines should allow seamless area and interior/exterior transitions. Fallout 4 will likely (and hopefully) be the final game to use the geriatric GameBryo/Creation Engine (which debuted with 2002's Morrowind), since Bethesda have indicated that all of their future games will use the Void Engine, based on the new id Tech being used to power games like Doom 4.

No release date has been set for Fallout 4. However, Bethesda typically announce games between 12 and 18 months before release, so a 2016 release date appears likely.

I hope the load times are a bit quicker on the PS4, that would be nice. But seriously, I'm so freaking stoked for this! It looks awesome! And I've been dying to play something other than Far Cry 4 on my PS4.