With Bethesda showcasing Fallout 4 (due out improbably soon in November), the Doom reboot and very pleasingly announcing a Dishonored 2, it was fair to assume that they'd be walking off with the "Best Showcase of E3" award. However, Sony unexpectedly gazumped them. They confirmed that the long-gestating Last Guardian was finally coming out in 2016, then announced (controversially) a Kickstarter for Shenmue 3, which has already smashed through its funding in 24 hours and is a strong candidate to become "Biggest Kickstarter Game of All Time". Then Sony casually dropped this bit of information:

After years of fans being teased and disappointed, it's finally real. Final Fantasy VII is being remade with state-of-the-art graphics and sound for PS4, likely with XB1 and PC versions to follow.

Released in 1997 on the original PlayStation (and a year later on PC), Final Fantasy VII is one of the most critically-acclaimed games of all time. It was revolutionary in its day, mixing beautiful 2D environmental artwork with 3D characters and a then-revolutionary, fully-3D battle system. The game was also noted for its extremely well-handled characterisation, the controversial decision to kill off major characters as part of the plot and the twisting, turning storyline. The game also had an unusual setting for a Japanese RPG, taking on board cyberpunk, SF and steampunk influences alongside medieval fantasy elements. The musical score was also phenomenal. It did all this despite being hamstrung by a very ropey English translation and its clunky presentation on three CD-ROMs which required occasional swapping. 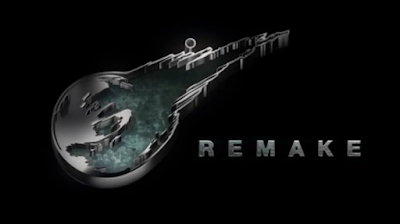 The original game has been available in moderately updated and tweaked builds based on the graphically superior PC version for a few years now, but fans have been clamouring for the original game to be fully remade with modern graphics and sound. Square have indicated that this would require a massive commitment of resources (and they're not kidding). With the much-delayed Final Fantasy XV finally closing on a release date, it looks like they have decided that Final Fantasy VII Remake will be their next big project.

Square Enix have indicated that work is only in its early stages on the remake, but they'd be silly to not try to hit the 20th anniversary of the original game, which falls on 31 January 2017.
Posted by Adam Whitehead at 19:35

Fantastic news. Final fantasy Vii is oe of the best RPG's ever made. A minor nitpick though; Unless I have lost one my cd's I'm pretty sure it was 3 cd's. Saying that, I haven't played it all the way through in years.

There are no words for how excited I am about this! Provided it's not another fake-out, anyway. But if this is what it appears to be, it's pretty much THE thing that would make me cave and buy a PS4.

Ah, brain fart. It was 4 CDs on PC, with an installation disc as well as the 3 CDs full of FMV (which you could install if you had a then-massive hard disk, removing the need to swap CDs).

I see, i never play edit on PC, as I suspect they changed the MIDI soundtrack, which I would find would rather spoil the gameplay of the original. It plays wonderfully on the PSP and vita however.