Harlem, New York. Following events in Hell's Kitchen, Luke Cage is laying low. He has two jobs, working in a barbershop by day and in a kitchen by night. A series of chance events lead to the murder of a friend and mentor, so Luke Cage reluctantly breaks out his crime-fighting skills to avenge his friend and find his own identity. 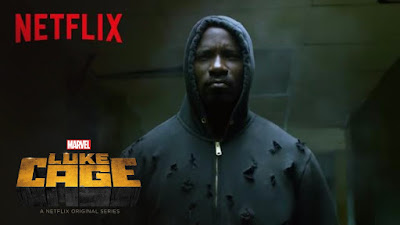 Luke Cage is the third of a planned six-series collaboration between Marvel and Netflix, following on from Daredevil and Jessica Jones and running ahead of Iron Fist, The Punisher and The Defenders, which will see the heroes from the first four series (it doesn't seem that The Punisher, which was a late addition to the project, will cross over in the same way) join forces against a mutual threat. It's definitely one of the most ambitious TV projects that has been mounted in many years.

As a project it's been mostly successful: the first seasons of Daredevil and Jessica Jones were excellent, with brilliant acting and strongly-defined villains and thematic elements. The second season of Daredevil, whilst still very watchable, was a little bit more incoherent and lacked a decent enemy. In particular, its pacing was a big problem and the series was drawn out to a slow and meandering ending.

Luke Cage, unfortunately, is weaker still and for many of the same reasons: the story is far too thin to support 13 episodes (it should have been 6 episodes, or maybe 8 tops), the "big bad" of the season is monumentally disappointing and the show's thematic ambitions become muddled to the point where it's impossible to work out what the show is trying to say.

Backing up, the show has plenty of good points. The first half or so of the season is pretty tight, with Luke Cage (Mike Colter reprising the role from Jessica Jones) going up against local gangster Cottonmouth (House of Cards's Mahershala Ali) after his mentor Pop (The Wire's Frankie Fason) is accidentally killed in a shoot-out. At the same time, local cop Misty Knight (Simone Missick) is investigating Cottonmouth's criminal activities and his relationship with his cousin Mariah (Alfre Woodard). There's a nice, tangled-up moral mess to the situation, with Cottonmouth genuinely respecting Pop and losing it after a subordinate kills him unintentionally.

Mid-season things switch up, with Claire Temple (Rosario Dawson reprising the same role from both Daredevil and Luke Cage) joining Team Cage. Cottonmouth's drug supplier Diamondback (Erik LaRay Harvey) then takes over as the main villain after he gets annoyed with Cottonmouth failing to deal with Cage and takes matters into his own hands. It's at this point that the show goes off the rails.

Cottonmouth is an interesting villain, well-played by Ali and featuring a genuine degree of nuance. Diamondback is not. He's a dull thug, played with a near William Shatner level of hamminess by Harvey. The character is deeply boring and when he shows up in a special suit in the final episode to fight Luke Cage, it's unintentionally hilarious. By this point the show has also run out of ideas so it spends three episodes dwelling on the possibility that Luke Cage might die (hint: he doesn't) and two on a deeply tedious hostage situation that feels designed to spin wheels rather than tell a story or develop character.

The show also has a pretty incoherent attitude to format and structure. Most episodes don't have a cold open, but then several do for no real reason. Several episodes feature flashbacks immediately before the information in them become relevant in the present day, which feels lazy and obvious. However, the prison flashback episode is a big winner since it has structure and pacing and tells a complete story in 50 minutes, which none of the other episodes manage.

There are some other bright spots: Misty Knight's police bosses are obstructionist but never stupid, and expertly avoid being cliches. Alfre Woodard is excellent throughout the season, even when her plot turns are less than convincing. The music is brilliant (although Method Man's cameo as himself is completely bizarre).

But these good points only make the show watchable, never exceptional. The tone of the series is all over the place. One moment it feels like the show is making a serious point riffing off the Black Lives Matter movement and the problem of race relations in modern America, but then it runs scared from the idea (in one incongruous moment a white police officer explains his decades-long history of policing in Harlem in detail to make it clear he's not racist). It spends a lot of the time trying to stay "grounded" but then breaks out bazookas and super-powered suits that would have looked cheap on Agents of SHIELD. The police's attitude to Luke Cage also changes at random between episodes, veering from them trying to hunt him down like a dog after being framed as a cop-killer and being okay with them. It's also great to see Claire being given a lot more to do, but it's then a bit odd to see her being reduced to a damsel in distress in several scenes and her potential romance with Luke Cage feels shoehorned into the story for no real reason.

There is a fair bit to enjoy about Luke Cage (***) such as the performances, music and atmosphere, but the pacing is poor, the ultimate villain is deeply boring and the show can never quite make its mind up about what it's trying to say or do. The show is available to watch now on Netflix.
Posted by Adam Whitehead at 19:16

Small correction: Diamondback is Cottonmouth's gun supplier, rather than drugs. Great review though! Spot on about the second half of the season.

Calling DD season 2 "very watchable" is quite charitable, I found it a chore to get through

Honestly I find this series to be a case of style over substance. To me, it never got going and I worry about the entire Netflix Marvel series. They seem to be running out of steam. Season 2 of DD was poor and now Luke Cage. Hopefully, Iron Fist will be better.