Jack Joyce is called home to Riverport by his best friend Paul Serene. His brother William has created time travel technology, but in the process has apparently become unhinged. Paul wants Jack to help him complete William's experiments and calm his brother down. However, the experiment goes horrendously wrong, causing a fracture in the space/time continuum. As the fracture grows worse, Jack gains powers over time and space...but so does Paul, who has been flung seventeen years into the past. When he catches up with Jack he is now a different man, with enigmatic motivations...and the same powers Jack has. 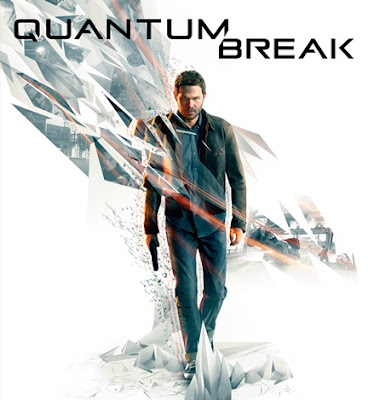 Quantum Break is the latest game from Finnish developers Remedy Entertainment. Way back in 2001 Remedy released the iconic action game Max Payne, an epoch-marking title which transformed the action game into a balletic display of violence, bullet time and gritty, noir storytelling. Its sequel, Max Payne 2, remains one of the vanishingly few decent examples of a video game romance ever attempted (and pretty much the only one in an action game). Their 2010 title Alan Wake fused action with survival horror, again set against the backdrop of rich storytelling and a wry sense of humour. Remedy aren't quite like any other developer out there, which is why their games are Day One purchases for me (on PC, anyway).

Quantum Break is very definitely a Remedy game. It's action focused, combat-heavy and uses state-of-the-art graphics technology. The game's propriety Northlight Engine is a technological marvel, offering up both astonishing visuals, (mostly) fluid action and impressive optimisation. I particularly appreciated the fact that the game didn't make my PC run as hot as Deus Ex: Mankind Divided recently did, despite offering superior visuals.

Quantum Break is also a storyline-heavy game, telling its twisting narrative of time loops through both gameplay, in-engine cut scenes and, remarkably, over an hour of live-action video. These videos take the form of TV mini-episodes, filling in the backstory and narrative of what's going on with the antagonists at the same time that Jack is going through his adventures in the gameplay. To maintain continuity, the game features the same actors playing the roles in the live-action pieces as well as lending their appearances and voices for the in-game sequences. These aren't unknowns either, with Shawn Ashmore (X-Men), Aidan Gillen (Game of Thrones, The Wire), Lance Reddick (Fringe, The Wire), Dominic Monaghan (Lost, Lord of the Rings), Amelia Blaire (True Blood) and Brooke Nevin (The 4400) all playing major roles. 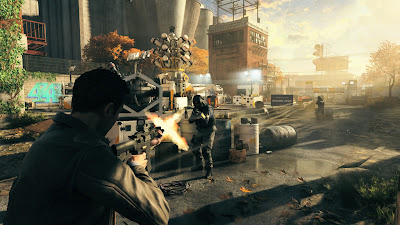 The game unfolds through gameplay sequences where you investigate a scene or solve puzzles, which often segues into a combat sequence. Fighting consists of standard cover-based shooting (with a rather elegant cover system which simply sees you automatically take cover if you're standing behind something that can be used as such) and also the use of your temporal powers. Interestingly, given Remedy's pioneering use of bullet time, you can't use bullet time as such but you can create temporal shield to freeze bullets in mid-air, trap enemies in stasis bubbles (which you can fire into, so they're instantly hit by hundreds of bullets when time resumes) and set off temporal blasts to throw people through the air. Later in the game enemies appear who can generate their own temporal fields and gain some immunity to your attacks, forcing you to adapt new, more complex strategies. Combat is, mostly, tactical, satisfying and fun.

The game is very narrative-heavy, so if you're after fact action game with limited story, you may want to steer clear. The story is well-told, with a reasonable engagement with the complexities of time travel and temporal paradoxes. There are some plot holes if you think about things too much, but overall the story is an entertaining slice of pulp SF fun with characters you do end up caring about.

It's not a perfect game. There's some jankiness to the controls and occasionally dubious collision detection. The game also severely restricts where you can climb up walls and over obstacles but doesn't give you any way of differentiating these from the areas where you cannot, occasionally leaving you frustratingly bouncing up and down in front of a ledge you really should be able to grab hold of. The game also triggers your frequently-used "time surge" power (which sees you jump forward a dozen feet or so in one go) in the direction your character is facing, not that the camera is facing, occasionally resulting you in hurtling off in unexpected directions. Once you learn to leave a few moments for your character to turn around, it's not really a problem. The live-action TV sequences are also pretty decent - easily the best such things ever created for a video game - but whilst the main cast are excellent (especially Aidan Gillen, who turns in a better performance in the game than he's done in six seasons of Game of Thrones) some of the supporting actors are more enthusiastic than skilled. Oddly, it all fits in with the pulp B-movie feel of the piece. 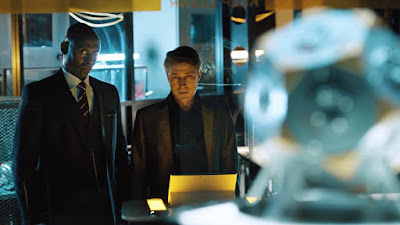 The game also suffers a little from having a generally smooth difficulty curve, but then featuring several quite ridiculous spikes, with no information context or information being given on how to defeat boss enemies. The final battle with its insta-death enemy attacks, which is easily ten times harder than any other fight in the game, is particularly guilty of this. It's certainly survivable, but it does interrupt the flow of the game.

More impressively, the game has four different "junction" points. At each one of these junctions you have an important decision to make which will change the course of how the story unfolds. Using a temporal vision, you can see some (but not all) of the impacts your choice will make. The game signposts these moments quite clearly, allowing you to note which choice you've made so you can choose differently on a replay. For a linear action game with no multiplayer, such a system is vital to maintain interest and replayability to the game.

Quantum Break (****) is a visually impressive game with dynamic, fun combat and a reasonably good story delivered through sympathetic characters (even the villains are quite well fleshed-out). There's some iffy performances and occasional insane difficulty spikes, but overall this is a very impressive, atmospheric and well-made game. It is available now on PC and X-Box One (UK, USA).
Posted by Adam Whitehead at 17:51

I totally agree with you about Remedy games being a day 1 purchase. I even got an Xbox 360 solely because Alan Wake was exclusive to it (at the time).

Quantum Break is their weakest game but far better than 97% of stuff out there.

The acting and cinematic interludes are fantastic. This is one of the few games where you WANT to watch them. Most games you want to skip them.