The mining ship Red Dwarf, lost in deep space for three million years, is continuing its long voyage home. The four-man (well, one-man, one-hologram, one-android and one-bipedal-cat) crew continue to get into unusual scrapes as they seek to survive. 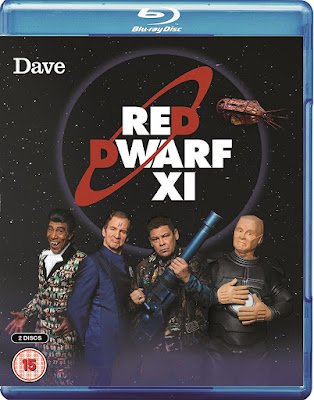 Red Dwarf began way back in 1988, making it easily the longest-running science fiction sitcom in history. Part of the show's success is its mixing of real SF ideas with funny gags and character development rooted in tragedy and pathos: Red Dwarf at its best is not afraid to make its audience feel sorry or even upset as it even makes them laugh.

Unfortunately, the more detailed characterisation and tragedy mostly left the show along with co-creator and writer Rob Grant after the sixth season. Since that time Red Dwarf has, under its other co-writer Doug Naylor, become a much more conventional sitcom with running gags, recurring characters and ideas and topical humour that may be outdated in a few years' time but raises a smile now.

This eleventh season airs four years after the tenth, itself a low-budget attempt to get the show back on the air via the UK cable channel Dave. That was very successful, hence a noticeable budget increase for this season with more visual effects, location filming and more elaborate sets. It's still a long way from the show at the height of its biggest success on the BBC at the end of the nineties (during the seventh and eighth seasons, when the humour risked taking a back seat to the spectacle), but it definitely frees the show up to open up the scale and employ some more highbrow and expensive ideas.

For the most part, it works. Without Grant or another more character-focused writer, the show is never going to be as good as it was back in its brilliant second through fifth seasons (and the only-marginally-weaker sixth), but we're also a long way from the more tedious episodes of the seventh through ninth seasons as well. Naylor seems to be writing within his limitations, knowing that what he's good at is channelling SF ideas for laughs. Some of these misfire - season opener Twentica hits a series of dud gags - but things rapidly improve from there. A vending droid is mistaken for a genius medical bot and is given the task of carrying out vital surgery, Kryten has a mid-life crisis and finds a way of communing with the universe, and - in easily the best episode of the entire series since Season 6 - Rimmer is promoted by a 3D-printed Space Corps officer and finally gets his dream job only for it to all go spectacularly wrong. There's also a couple of Cat-centric episodes which work pretty well.

Continuity is, as usual, treated as something optional, so there's no mention of the missing Kochanski or Holly, which will likely annoy some long-term fans, and the show is a little bit too eager to use simulants and GELFs again rather than creating some new concepts. But the cast is on fine form, even if their age is starting to tell, and even in its weaker moments the season remains firmly entertaining.

No, it's not the show at its best and some of its worst post-Grant indulgences do occasionally resurface, but the eleventh season of Red Dwarf (***½) is overall fun and watchable. It will be released on Blu-Ray (UK, USA) and DVD (UK, USA) in November. Season 12 has already been filmed, is currently in post-production and will air on Dave in mid-to-late 2017.
Posted by Adam Whitehead at 16:34

No Holly/Hilly, really? As much as I loved the classic episodes, I haven't watched anything beyond the weak, humorless seasons 7 & 8 and the wasted potential of Back to Earth - Rob Grant could have done so much more with it. Still, I wouldn't mind catching up at some point.