AD 2151. Earth has spent a century recovering from a devastating global war and developing new technologies, such as the ability to travel faster than light through Zephram Cochrane's warp drive. The alien Vulcans have taken taken humanity under their wing, seeing in them great potential but also great dangers linked to their rashness. Now Starfleet's first Warp 5-capable starship, the NX-01 Enterprise, is ready for launch under the command of Jonathan Archer. But the Vulcans are still uncertain about their allies and place one of their own on board to monitor events. 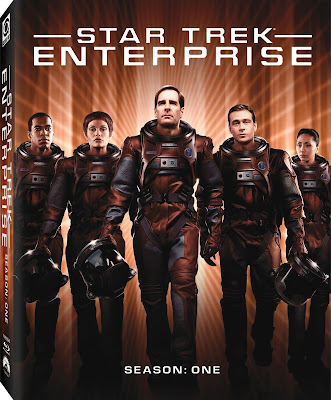 Back in 2001 Star Trek was suffering from a bad case of "franchise fatigue". Rick Berman had produced 21 seasons of television, none shorter than 20 episodes, spanning three different series in fourteen years. His feeling was that the franchise needed to be rested to come back stronger, but Paramount were adamant that they wanted to keep the Star Trek gravy train afloat. Wearily, Berman and Voyager producer Brannon Braga agreed to create a new show but only on the condition that they could be more experimental and bold with it.

The result was Enterprise, a prequel series set 115 years before Captain James T. Kirk's original five-year mission, and about 90 years after the time travel events of the movie Star Trek: First Contact. The idea was to strip away all of Star Trek's convenient and "easy" technology - the transporter, photon torpedoes, shields, the universal translator, replicators - and make something much grittier and more "real", with less pure and ideologically-motivated humans and the making of space into a much darker and more threatening place.

It's a nice idea which, intermittently, works. Enterprise's main problem in this first season is that it kind of pulls its punches. Not as much as Voyager did, but still a lot more than it should. Enterprise doesn't have shields, but instead it can "polarise the hull plating". It doesn't have torpedoes but it does have missiles which are almost as good. It does have a transporter, but it's "risky" to use (albeit it works perfectly when the script needs it to and not when it doesn't). The universal translator is an advanced version of Google Translate and about as reliable, but they have a linguistics genius on board who can straighten it out, so that's fine. All of the less-than-scientific facets of the Star Trek universe - artificial gravity and sound in space most notably - remain intact.

Still, Enterprise remains a big improvement over Voyager. The show deliberately hearkens back to the original series's sense of adventure, with Archer as a bold, curious scientific explorer (who's not afraid to get his hands dirty when needed) in Captain Kirk's mould. It's also fun to see what mischief the crew can get up to without the Prime Directive holding them back (even though by the end of the season the need for it becomes clear). Unlike Voyager's crew of dysfunctional, depressed bores, this crew is a bit livelier and funnier, with a generally much higher standard of acting ability (Dominic Keating being the weakest link, and he improves significantly as the season progresses). Scott Bakula, possibly the most likable person on Earth, makes for a great captain, Jolene Blalock overcomes some dubious costuming choices to deliver a smart and nuanced performance (her deadpan sense of humour comes more to the fore in later episodes) and Linda Park is great - if not given enough to do - as linguistics expert Hoshi. Connor Trinneer's engineer (who seems to be a mash-up of Scotty's engineering genius and McCoy's Southern charm) Trip is less interesting but kind of harmless. Anthony Montgomery's Travis probably gets the rawest deal in terms of having anything to do. The strongest performance on the show is given by John Billingsley as Dr. Phlox. Early fears that he might be Neelix Mk. 2 never materialise and he goes on to give a nuanced performance throughout the season (apart from a comedy plotline in which he is woken up early from his annual hibernation, which is irritating).

Enterprise may be better than Voyager at this early showing, but that certainly doesn't make it perfect. Individual episodes vary immensely in quality, with some very strong and entertaining episodes like Dear Doctor and The Andorian Incident having to make up for a lot of typical, semi-Star Trek filler pap. For a first season, Enterprise tests its viewers' patience a lot. Maybe not as much as the first seasons of TNG and Voyager, but there's a still an fair bit of tedium to get through to get to the good moments.

More questionable is the insertion of a storyline in which time-travelling operatives from the far future are engaged in a "temporal cold war" with one another. Having a Star Trek prequel series building naturally to the universe we know is a good idea. Having one in which some guy from the 31st Century shows up and tells Archer that he's special and his actions will lead to the founding of the Federation is a lazy shortcut. The main alien race in this storyline, the Suliban, is also not one of Star Trek's more interesting antagonist races, it has to be said.

But, ultimately, Enterprise ends up being diverting and entertaining. It's also interesting as a historical artifact: shortly after this season began, 9/11 took place and American SF took a turn for the darker and more cynical. That gave us some great TV like the new Battlestar Galactica, but it also may have taken things down too dark a path. Enterprise's overwhelming feeling of optimism, adventure and exploration is, when done well, a refreshing tonic to the grimness that would come after it.

The first season of Star Trek: Enterprise (***½) is watchable, harmless and occasionally very cheesy fun. It's not the franchise at its best, but it's a long way from it at its worst. It does have a lot of potential, but it needs to up its game in future seasons. The season is available now on Blu-Ray (UK, USA) and on Netflix in the UK and Ireland.
Posted by Adam Whitehead at 11:39

I remember Enterprise just as you describe it: diverting harmless fun. It's not actively irritating as Voyager, but its far below Star Trek at its best. Unfortunately, for all Berman&Braga's talk of Ent "not being your grandfather's Trek" or some such, it's still very much so. Just because the show engages in juvenile sexuality stuff via decon chamber and Vulcan neuropressure (shudder), it doesn't mean that it's in any way revolutionary or groundbreaking. Especially when you compare it with BSG, which aired around the same time, the vast gulf in quality becomes all too apparent.

I loved the first season of Enterprise, and then they messed it up with the temporal war. I could have watched a dozen seasons of low tech Enterprise and enjoy it, but once it all became irrelevant due to time travel and crap like the Xinti space I quickly lost interest. Series like The Expanse show the lost potential of Enterprise.

I fear that the Star Trek franchise, which I personally love, has become too polluted by studio interests to be able to refreshingly entertain anymore. Perhaps it is time for a new franchise or no franchise at all, just good shows with good stories.