The Clone Wars rage on, but the Republic is winning more victories. As Mon Calamari falls under attack and the Republic races to its defence, General Grievous prepares an assault on Naboo which can only be defeated by the Gungans. Meanwhile, on Dathomir Asajj Ventress is offered the chance to rejoin the Nightsisters, but Count Dooku hungers for revenge. And on a remote industrial world, an old enemy of Obi-Wan Kenobi's is gathering his strength. 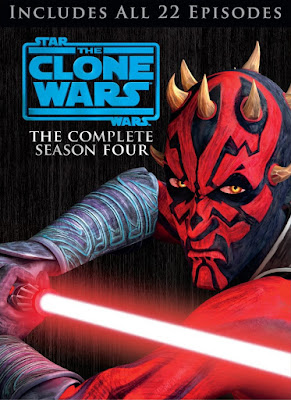 The Clone Wars enters its fourth season at full steam, ploughing through multiple battles and theatres of war, jumping back and forth through the conflict's timeline with wild abandon and jumping between storylines and characters with glee and confidence. The show makes excellent use of the vast cast of characters it's built up over the three preceding seasons, from bounty hunters to politicians to individual clone troopers, to tell its stories.

We get some of the most impressive battles so far, with the underwater engagements on Mon Calamari bringing some new visuals to the table, and the battle on Umbera, a planet shrouded in darkness, being particularly spectacular. There's also a slew of lower-key storylines, such as Asajj Ventress discovering a new destiny and Obi-Wan Kenobi going undercover in a criminal organisation and being forced to work alongside Cad Bane.

Thre's a tad less emphasis on politics than the previous season, maybe a bit more action but also more of a willingness to go long on storylines, with more multi-part story allowing more time for character development and action scenes. The show's freedom and willingness to experiment is impressive, although there's occasional re-uses of already-done tropes (Jar-Jar getting a meta-textual story in which he saves the galaxy is amusing but overdone; Artoo and Threepio get another - pretty good - solo adventure). The return from the dead of an old enemy in the season finale also crosses the line from "highly implausible" to "utterly unbelievable", even by Star Wars standards. But the show has earned some trust to see where they take this development in the fifth season.

The animation is more impressive than ever before, and by this point the CG team has built up a huge, impressive list of assets they can use to make for ever more-complex and varied scenes. Scenes involving fire, in particular, are much improved.

Season 4 of The Clone Wars (****) continues the show's tendency of being pulp fun, entertaining and more enjoyable than the prequel trilogy it spins off from. It is available now as part of the Complete Season 1-5 box set (UK, USA).
Posted by Adam Whitehead at 15:40