Rick Sanchez is a brilliant but morally dubious inventor who has the ability to travel through time and space. Forced to move in with his daughter Beth and her "normal" family, Rick has soon embroiled them in his misdeeds, particularly his easily-influenced and hyper-sensitive grandson Morty. Rick and Morty set off on intergalactic adventures, but things soon become odd at home, as Morty's sister Summer gets a job with the devil, and Beth's husband Jerry gets fired after being inadvertently kidnapped by aliens and placed in a low-AI VR simulation of his own life. 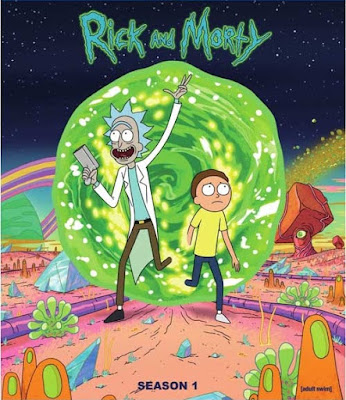 Rick and Morty is an animated series airing on Adult Swim in the USA. It's the brainchild of Justin Roiland, a voice actor and writer, but given some additional creative firepower by Dan Harmon, the creator of Community and recent projets including the excellent HarmonQuest.

To sum up, Rick and Morty is a mash-up of Back to the Future, Futurama, South Park and an everyday family sitcom, with a light sprinkling of Archer over the top. The series is ribald, madcap, zany but it is also surprisingly restrained and occasionally even reaches pathos, especially when it deals with Jerry and Beth's strained relationship, and the fact that Morty was once diagnosed with learning difficulties. It can also occasionally be rather unsettling, going for a funny gag that then becomes outright disturbing, such as the encounter between Morty and a sexually-frustrated royal jelly bean in a toilet that has you reaching for the remote in horror before, fortunately, the scene ends on a non-vomit-inducing note.

It's an interesting mix of the cynical and post-cool (particularly with Rick's apathetic, amoral attitude to life) with the genuinely heartwarming and optimistic. The comedy mixes toilet humour with much cleverer and more subtle gags about genuine scientific issues (the planet/not-planet status of Pluto fuels one of the stronger instalments of Season 1), catchphrases you'll soon be yelling at uncomprehending non-viewers and some wry observations on school, work and home life. It also has giant space genies which can be summoned to perform simple tasks but then meet a totally insolvable problem (how to make Jerry a good golfer) which turns them into rampaging psychopaths.

Rick and Morty's greatest asset is that it is simply hilarious, employing a wide variety of mundane and science fiction inspirations to generate humour from almost every scene and line of dialogue. But, like all of the best comedies (and especially SFF comedies, which often settle for lazy stereotyping), it generates that comedy from having very well-defined, conflicted and interesting characters. This is a well-judged comedy with brains and heart to offset its cynicism.

Season 1 of Rick and Morty (****) is available now on DVD (USA) and Blu-Ray (UK, USA). It is also now available to watch on Netflix in the UK and Ireland.
Posted by Adam Whitehead at 12:36