Rick and Morty's adventures through space and time continue. The intrepid twosome have to defend Earth from an interstellar musical reality show, avoid the long arm of the galactic law, repair Morty's parents' marriage and attend the wedding of Rick's best friend Birdperson. Needless to say, things go horrendously wrong. 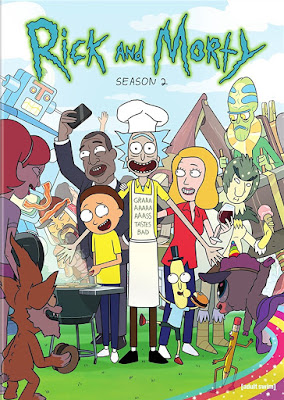 Rick and Morty's first season was by turns hilarious and clever, witty and coarse, smart and nuanced. Few shows even try to employ a fart gag followed by a humorous riff on quantum theory, but Rick and Morty does so with aplomb.

This second season picks up after the first and continues several continuing subplots, such as the dubious state of Beth and Jerry's marriage and Rick's ongoing self-loathing and pain that he is trying to bury through his scientific work. The second season amps these up to eleven, going beyond even the pathos that Season 1 evoked on occasion and hitting poignancy along the way. Like the best SFF comedies (Red Dwarf and Futurama), Rick and Morty succeeds through not just its comedy, but its intelligence and fine grasp of characterisation.

Season 2 revisits some supporting characters from Season 1 like Birdperson but there's also some new characters, such as the enigmatic Poopy Butthole (around whose bizarre character various fan theories of varying credibility circle), and also a willingness to change things up. In Season 1 Earth was unaware of the existence of alien life and higher dimensions. Season 2 rather dramatically changes that up with major ramifications for the rest of the series, showing a willingness to change the format to keep things fresh. There's also more of a willingness to involve Summer, Beth and Jerry on adventures and continue making Morty more of a grown-up, stronger character.

But the star of the show remains Rick, whose brilliance and humour hide a lot of pain and growing existential fear of death. He has flashes of humanity but these are challenged by his amorality, something that previously he didn't care about but now he has family members acting as his moral compass and making him question some things about his life. For an animated TV show with a character called "Poopy Butthole", Rick and Morty does have some damned fine writing.

It's also still brilliantly funny, with Season 2 featuring a brilliant riff on the classic Star Trek: The Next Generation episode The Inner Light through a video game called Roy, as well as playing with sitcom conventions when Jerry's hitherto-completely-unmentioned brother Steve shows up to stay, with spectacularly gory results.

Season 2 of Rick and Morty (****½) is available now on DVD (USA) and Blu-Ray (UK, USA). It is also now available to watch on Netflix in the UK and Ireland. Season 3 is due to start airing in the USA in December or January.
Posted by Adam Whitehead at 16:06