Ragnar Lothbrok is a great Norse warrior. He has discovered a means of navigating across the open sea between Scandinavia and the rich western lands of England, but his chieftain, Earl Haraldson, is unimpressed and plans to raid east into the Baltic lands. Ragnar defies his chief to lead a raid in an English monastery named Lindisfarne. Returning home with gold and Christian monks taken as slaves, Ragnar is acclaimed a great hero...and an enemy and rival of Haraldson. 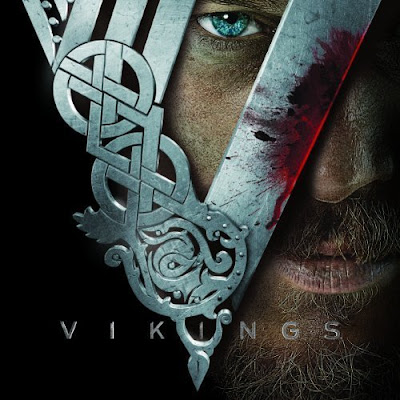 Vikings is a TV show about Vikings, doing Viking stuff like raiding, fighting, carousing and sailing. As far as TV shows go, Vikings does exactly what it says on the tin.

It's also made by the History Channel, which means that it strives to be historically more accurate than most shows about Vikings. It does feature the required amount of raiding, killing, blood-spurting, drunken partying and prayers to Thor and Odin, of course, but it also makes it clear that the Norsemen only raid during the summer and spend the rest of the year fishing, farming or engaging in other trades. The Viking code of law, which sees murder grievously punished and a robust (if primitive) form of jury trial in place, is given a nod and the more-or-less equal nature of women in Viking society as the keepers of the home and hearth, as well as occasionally joining raiding parties as shieldmaidens, is explored.

This first season is nine episodes long and unfolds with verve and vigour. Early episodes focus on Ragnar Lothbrook, played with wild-eyed charisma by Travis Fimmel (also recently seen in the lead role of the WarCraft movie) and his family, particularly his wife Lagertha, played with gravitas and barely-restrained fury by Katheryn Winnick. Clive Standen plays Rollo, Ragnar's older-but-less-capable brother who is deeply loyal to his family but also resentful of his brother's wits and jealous of his wife. Gustaf Skarsgard plays Floki, the builder of Ragnar's ship and the only person around capable of out-crazy-eyeing him. It is hinted in the series that Floki may be touched by the spirit of the trickster god Loki, as his crazy and unpredictable antics show. George Blagstan gives an interesting performance as Athelstan, the Christian monk enslaved by Ragnar but later becomes a friend and "our" viewpoint into the alien world of the Vikings. Rounding out the first season cast is the best-known face, Gabriel Byrne as the main villain, Haraldson.

Given that - Byrne aside - the entire cast is made up of newcomers and lesser-known faces, it's impressive that they all give incredibly convincing and passionate performances. In fact, given that it's from the same makers as the fun-but-cheesy-and-lightweight The Tudors, Vikings impresses all around for the weight and gravity with which it approaches the story. Character motivation is established early on and develops naturally, the Viking culture is portrayed with greater depth and complexity than almost any previous televised depiction and battle sequences (which the show does not shy away from) are visceral, bloody and convincing. The political machinations are fairly straightforward but nevertheless unfold with dire inevitability. Given the short run time, the series enjoys a strong variation in tone (from action to mystical religious stuff to good-hearted fellowship to romance to intrigue), location and character.

The show is reasonably historically accurate - to what we know of anyway - but some decisions are questionable. The idea that the Northumbrians don't know about the Vikings and have enjoyed a long period of peace so don't really know how to fight is somewhat questionable: the Anglo-Saxons weren't exactly shy about fighting and raiding one another and probably knew how to form a shield wall. The show's early episodes also establish a well-respected legal system which everyone is careful to obey, even Earl Haraldson, but later in the season he goes into full-on tyrant mode which is both disappointing from a character perspective and also conflicts with the earlier tone.

Overall, however, the first season of Vikings (****½) is enormous fun. It's well-written, well-acted all around, more subtle and nuanced than you'd expect and delivers tremendously good battle scenes. It's available now on DVD (UK, USA) and Blu-Ray (UK, USA).
Posted by Adam Whitehead at 18:55

Vikings is quality, gotta love us some Lagertha. And Floki. And Ragnar.

There's a typo in the name of the actor who plays Lagetha: it's Katheryn Winnick.