The planet Jijo is home to representatives from six different races, each hiding from the Civilisation of the Five Galaxies for their own reasons. Most of their high technology has been abandoned, lest it lead pursuers to them, but at great cost peaceful coexistence between the six races has been achieved. At the time of the Gathering representatives from these races meet to discuss the future...but this Gathering is interrupted by the arrival of a starship. Fearing the worst, the people of Jijo are faced with disturbing revelations from the outside universe and discover that their little backwater world is about to become very important indeed. 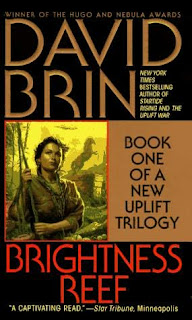 Brightness Reef is the fourth novel in David Brin's Uplift Saga and the first in a closely-linked trilogy. Whilst the first three books were set in the same universe and shared some references, they were mostly stand-alone novels. This trilogy is a continuous storyline spanning three novels, and indeed serves as a sequel to the events of both Startide Rising and The Uplift War, though this does not become more apparent until the fifth and sixth books.

Brightness Reef was published nine years after The Uplift War and it's clear that Brin has become a stronger writer in the interim. His prose is smoother and more varied in this novel than the preceding books in the series. Brin abandons the straightforward POV structure of the first three books in favour of a more varied approach, mixing third-person limited narration with the first person accounts of the traeki Asx (which, given that traeki are actually gestalt entities consisting of several semi-autonomous lifeforms, is not as straightforward as it sounds) and the memoirs of the hoon Alvin as he and his friends attempt to build a bathysphere to explore an off-shore underwater trench. 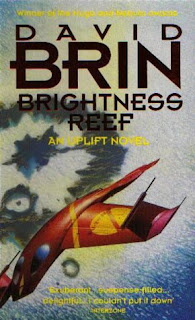 Of the other main characters, we have an amnesiac who has lost the power of speech and understanding language through severe head trauma, but can still communicate via music; a girl from a primitive tribe interacting with both the more advanced races of the Slope and then the visiting aliens; and a number of other Jijoan characters representing a number of different ideological viewpoints as they argue over the way forward for their unique culture. Brin's characterisation has always been strong, but here, given the much larger cast size, he is forced to be more concise, building up characters, plots and events quite quickly (though never rushed) in comparison. He pulls this off, and it's interesting that although the events of this novel are restricted to one small geographical area on one planet with no scenes set in space at all, the large cast and shifting viewpoints give the novel a more epic feeling than even the space battle-heavy Startide Rising. In fact, given the low technology nature of the setting, Brightness Reef is probably the closest Brin has come to writing a fantasy novel, and based on this novel it's a setting that Brin would do very well in.

As well as individual characterisation, Brin has to create six (eight, counting the more animal-like glavers and noors) distinct species, along with their biology and culture, and show how they interact with one another. Brin excels at this kind of 'worldbuilding', making each race distinct and interesting. This is enhanced by giving us POV characters from several of these other races to further bring them to life.

The pace of the novel is brisk, but the large cast means that Brin gets a little bogged down in touching base with all of the POV characters on a regular basis (probably the cause of the novel expanding from one book to three, although it has to be said I doubt he'd have fitted the whole trilogy into one novel, particularly in the last book where events take on a truly cosmic scale), and the importance and relevance of all the characters is still unclear at this point. There's also a question on exactly how Brightness Reef fits in with the events of the preceding two novels, though this is made abundantly clear in the last few chapters as events build to a climax and the reader realises how Brin is bringing together storylines he had been working on for fifteen years by this point in a rather impressive manner.

Brightness Reef (****) features superior worldbuilding, an epic scope and a readable, varied prose style, but suffers in comparison to its two forebears due to some bloat and a number of cliffhanger endings. Nevertheless, it is a rich and enjoyable SF novel that leads directly into its sequel, Infinity's Shore. The novel is available now in the USA and, second-hand, in the UK.
Posted by Adam Whitehead at 14:33

Sorry if I came in a bit late, but what is the UPLIFT series about. I heard you mention in this review that it is a sapce opera that reads like a fantasy book (planetary romance\sword & planet?). I would like to know since I'm enjoying the resugence of modern Sci-fi fiction:)

The Uplift books are based on the idea that it is not possible for a race to evolve into sentience and intelligence. Every spacefaring race has been found and genetically engineered into sentient by a superior 'patron' race in an unbroken line stretching back to the Progenitors 2 billion years ago.

Humans cause a stir when they show up because they have no patron race, leading to arguments about whether they did evolve naturally or if they were abandoned by a patron race hundreds of thousands of years ago. Because humans have already uplifted chimps and dolphins, they are granted the status of patrons, but pretty much everyone thinks of them as upstarts.

BRIGHTNESS REEF takes place on a planet where members from six races are in hiding and are hoping to be left alone to 'devolve' back into an animal-like state. For this reason, they have ditched most of their technology and are using carts, water mills, dams etc. It has a bit of a fantasy tinge to it, but given that an alien spaceship lands about ten pages into the book, this doesn't last that long.

I've been curious about this series for awhile. I loved Startide Rising, and thought the next novel to be alright. But, this has a great mix of races.

You plan on reading the next two volumes?