By Light Alone by Adam Roberts

Decades in the future, the world has been revolutionised by the introduction of photosynthetic hair. The poor now no longer need to be fed, as they can live off sunlight alone, whilst the rich flaunt their wealth and power by their unnecessary consumption of food and cutting their hair. Supermodels are now immensely fat and the rich very bald. A well-off family undertakes a skiing trip to Mount Ararat on the Turkish-Iranian border, but during their holiday their daughter, Leah, is kidnapped. Attempts to track her down fail, but a year later she is found and returned to their home in New York City. But Leah's return preludes a time of immense change in the world, as revolution threatens... 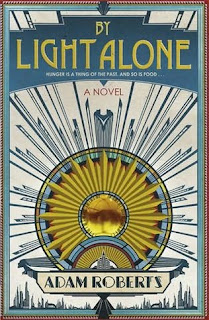 By Light Alone is Adam Roberts' eleventh novel. On the surface it's the story of a young girl who is kidnapped, returns home, and whose return serves as the catalyst for significant changes in her family life. But this is only a very shallow reading of the text. As the narrative continues, it becomes clear that there are a lot of different things going on, and periodically the text switches to a new POV and rewinds in time to provide a fresh perspective on events we have already seen. The main characters - Leah and her parents, George and Marie - are all somewhat unreliable narrators and finding the inconsistencies between their accounts of the same event is a fascinating exercise in itself.

The central SF element - the photosynthetic hair - is a Maguffin that sets up a world in which poor people no longer need to work to eat, resulting in a mounting overpopulation and unemployment crisis that threatens the lives of the rich and powerful. Roberts explores the ramifications of this well-meaning development through its impact on society and how that affects the central characters. The rich are now more self-absorbed than ever before, treating skinny people with long hair as social lepers and disdaining anyone who works for a living, whilst avoiding watching the news (which they regard as beneath them). However, their lives are also portrayed as empty, with little to galvanise or interest them outside of a few hobbies. Leah's kidnapping forces her father, George, into contact with ordinary people and her subsequent return catalyses him into seeing the world in a different way. The way that the characters, world and story drive each other relentlessly onwards is particularly impressive and accomplished.

However, an even more successful move is when Roberts executes a narrative shift in the second half of the novel, dropping us into the lives of the poor, whose freedom from having to find food has simply plunged them even deeper into abject poverty and desperation, raising the spectre of revolution and violence. This is a dark, grubby and distasteful world of sexual violence and petty crime, out of which emerges the prospect of change, though whether that is for the better remains unclear at the novel's close.

By Light Alone is an accomplished novel, with expertly-crafted prose, well-developed thematic elements and engaging characters combining to form an intricate, satisfying narrative which concludes by posing hard questions and not offering easy answers (out of the four Roberts novels I've read, this has by far the strongest ending). The problems are relatively minor: there is an idiosyncratic sense of humour in George's chapters which is occasionally tonally jarring, and the limits of the hair technology are not really explained. People not needing money for food is one thing, but presumably they still need it for shelter, clothes and water, so the apparent willingness of some of the hair-using majority to ditch their jobs and loll around on the beach all day doesn't entirely track. However, given that the explanations for much of this come from the rich cats whose views are inherently biased, this incongruity can be seen as part of the effect, rather than a problem in itself.

By Light Alone (****½) is an intelligent and well-written SF novel with real literary ambitions that it comes close to fulfilling. This may not be the modern SF masterpiece I am fully confident that Roberts is capable of producing, but it is not far off. The novel is available now in the UK and on import in the USA.

Roberts' novels are worth buying for the covers alone.

I'm looking forward to this one, thanks for your review!

I like the cover & the ideas sound cool. But what about us folically challenged folk? Do we slowly starve as our hairline recedes, or have they cured alopetia (which along with those other unachieveables: curing the common cold & working nuclear fusion - is clearly more difficult than magic green hair)? I guess I'll have to read the book now...

Yes, baldness has been cured. There's actually a minor and brief subplot about this factor.