Despite repeatedly saying that he would not direct Star Wars Episode VII: Absolutely Nothing to Do With Thrawn, Sorry, it was surprisingly announced yesterday that J.J. Abrams would, in fact, be directing the movie. 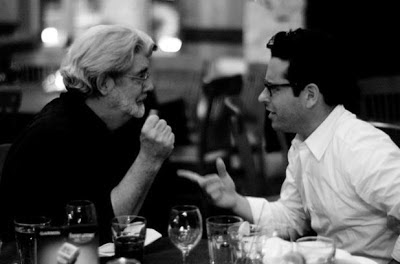 "Okay, George. So the main bad guy is a billowing cloud of black smoke and Luke has to defeat him by running around the corner and sticking a plug in the ground."
"Fine, but only if Jar-Jar's kids are in it. One of them can be a Jedi with dual-wielding lightsabres which he comically uses to smash up the scenery whenever the pace slackens."
"Deal."

Abrams had previously ruled himself out of contention, citing both his commitment to the new Star Trek movies for Paramount (Abrams's second Star Trek movie, Into Darkness, is out this year) and his overwhelming fandom of the Star Wars franchise preventing him from approaching a new film with the necessary detachment. Clearly these issues have been overcome, with Abrams agreeing to produce a potential third Star Trek movie (as well as being on board for a fifth Mission: Impossible film).

Star Wars Episode VII will be released in 2015 (possibly May). Michael Arndt is writing the script, with Lawrence Kasdan and Simon Kinberg co-producing.

Colour me cautiously optimistic. Although I have strong problems with Abrams's Star Trek work (so far), I enjoyed his work on Lost (though Abrams's involvement after the first season was limited) and Cloverfield, which he produced. Star Wars, if done right, could also be a better match for his skills.
Posted by Adam Whitehead at 19:55

so far all prejudices against Disney seem to get confirmed. There is no question that it will be a moderate success, but that's not the problem. Or rather it is the problem how that will come about. Abrams is one of the most Disney-eque choices there were, in the worst possible sense.

He was involved with the best part of Lost: the character-driven, intriguing first season, including one of the best TV pilots ever. Plus, Super 8 was a lot of fun. And his Star Trek, while not the best film in that franchise (obviously Wrath of Khan), revitalized the property and felt a lot like a Star Wars movie. So he seems like a pretty great choice.

His vision of Trek left me feeling completely disinterested and disengaged. It was like a paint-by-numbers project with no real soul or inspiration behind it.

I fear not even the Force can save Star Wars at this point.

Yeah, I'm not big on this decision either, just because I haven't really liked any of his other movies. I'm ready to be corrected, though!

Well, it could be worse. It could have been given to Michael Bay. :P

Any news on the Star Wars TV-show or is that been given the flick?

I know I should, but I still can't get why fans of (insert big sf/f franchise or book series here) get so possessive about it, like they (we?) knew "how it must be done". Fans of Star Trek dismissing ferengi stories on Deep Space Nine because "they're ridiculous and not Trekky" or Steven Erikson fans metaphorically burning copies of Toll the Hounds because it was "far too long and here's how it should've been written". I am not a hardcore fan of the Star Wars universe but even if I was my only opinion is: We'll see.

Only josh whedon had a chance to make this right....