Scott Bakker's THE UNHOLY CONSULT delayed for no apparent reason

Fans of R. Scott Bakker's Second Apocalypse mega-series have been eagerly awaiting the sixth and (sort of) final novel novel in the series, The Unholy Consult, since it was submitted to Overlook Press in February 2014 for publication. However, since then there has only been a deafening silence from Overlook over a publication date. This has recently been compounded by the removal of the ebooks for the five previous volumes from sale. 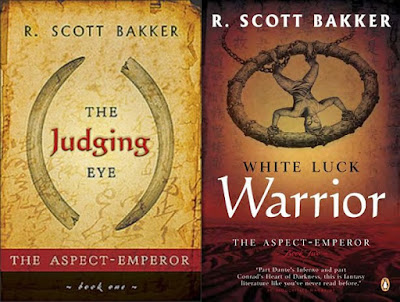 The Second Apocalypse is divided into two sub-trilogies, The Prince of Nothing and The Aspect-Emperor. Bakker also plans a third series, currently a duology, although this is apparently more of a sequel to the first six books and The Unholy Consult will provide closure to the series as a whole if necessary. The previous novels in the series were The Darkness That Comes Before (2003), The Warrior-Prophet (2004), The Thousandfold Thought (2006), The Judging Eye (2009) and The White Luck Warrior (2011). Combined worldwide sales of the series to date are in the neighbourhood of one million books sold.

Overlook Press has been Bakker's primary publishers in the United States. However, Overlook are a relatively small and independent publishing company without the resources of many of the larger publishers to get lots of copies on the shelves. Sales in the United States have been relatively low compared to Bakker's performance in other markets: sales for Orbit Books in the Commonwealth territories (most notably the UK) seem to have been a lot stronger. Bakker's American sales through Overlook seem to account for only a quarter of total sales of the series, which is highly unusual. A move to a bigger publisher may be a good idea, although for in-progress (and in-contract) series that can be very complicated.

According to Scott, despite turning in the first draft, complete manuscript for The Unholy Consult in February 2014 (almost sixteen months ago now), Overlook are still to announce a publication date and have not yet even assigned an editor to the book. So if they began editing work tomorrow, it would still be unlikely for the book to come out much before the end of 2016 at the earliest. Other publishers, such as Orbit in the UK, are unable to proceed until Overlook have completed the final copy-edit of the novel.

Overlook have also not yet explained why the ebooks of the series have been pulled from sale.

To help the situation, it may be worth sending a polite email to Overlook asking a release date and explaining why the series appeals to you. Tweeting them may also be of use. If you haven't read the series yet because you were waiting for the final volume, it sounds like The Unholy Consult will give enough closure in case the sequel series never appears, so now is a good time to get off the fence. Tweets to Overlook to that effect may also be helpful. I would also recommend following Bakker on Twitter. Whilst Bakker uses Twitter more for philosophical musings than marketing (as he cheerfully admits), an increase in his social media profile would certainly help matters.

On the positive side, Bakker confirms that there is a lot of interest in the series from other publishers if Overlook do choose not to proceed with finishing the series. However, the Paul Kearney situation over The Sea-Beggars trilogy (where the US publishers have refused to publish the third volume but also refused to give up the rights to Solaris, who are very keen to finish it off) shows that a transfer of rights can be along-winded process in itself.

Updates as I get them.

Email ThisBlogThis!Share to TwitterShare to FacebookShare to Pinterest
Labels: no seriously wtf, orbit books, overlook press, r. scott bakker, the aspect-emperor, the prince of nothing, the unholy consult, wtf

I read these a few years ago, and remember them well. I tried to get back into them recently, though, and found it quite a bit too ... well, intentionally grim? rapey? I don't know. It didn't sit well, anymore, and it's a shame because I just love the worldbuilding.

I think Bakker only turned in the final manuscript late January of this year, 2015. Not in February 2014.

Can we have an email address to write to?

And Overlook cannot communicate with readers because?

Email sent. It will be a crying shame if 'Unholy Consult' doesn't see the light of day. Bakker's work is grim, yes, but compelling and beautiful with it. Fingers crossed for a change in the wind.

I wrote them thank you! The books are the best!

I just looked at the "great ordeal" link and it says this book delivers the first half of the conclusion, so it looks like they are planning 4 books? Love Bakker's world (as I do GRRM's) just such a shame that between the authors and the publishers getting some of these great series over the line seems so difficult.

I started rereading the book before sometime Christmas, not knowing that the next book is on its way. So happy that I stumbled onto this site. The series is truly one of the best that I have had the pleasure of reading. Hard to go back to ordinary fantasy after spending time with Achamian.

Any news on when the Unholy Consult will be published? Was under the impression that it was essentially done when the decision was made to partition it. Of course, the Kingkiller Chronicles were meant to be *done* almost a decade ago.

The book discussed in this article was split into two volumes for length. The first, THE GREAT ORDEAL, was published in July in the USA and this month in the UK, so it's out now. The second part, still called THE UNHOLY CONSULT, will be released next summer. I believe the target date is July 2017.