Not all cities are the same. Some are peaceful, civilised places where weary travellers can rest from their journeys and tend to the business of the day. Others are beautiful retreats sitting on the shores of azure seas. Some are crime-riddled, smog-shrouded hellholes ripe for revolution. Others float an infinite distance above a spire of infinite height at the very centre of the multiverse. Some are criss-crossed by railways, home to cactus people and sport an embassy from hell. 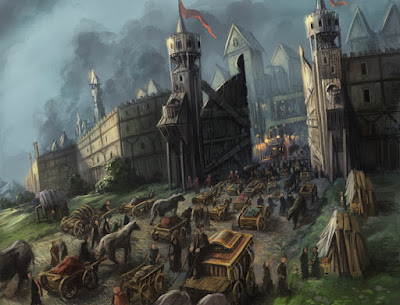 One of the most iconic and oldest cities in fantasy: Lankhmar, from Fritz Leiber's Fafhrd and the Gray Mouser series of short stories and novels. Artwork by Jonathan Taylor.

Fantasy is a broad genre which tells many different types of story. But central to many of those stories is the city. A bold adventuring fellowship may spent a lot of time in enchanted woods, braving treacherous mountains or battling dragons in abandoned dwarven mines, but sooner or later their path leads back to the streets and sewers of a bustling metropolis. This is usually just in time to be chased by hooded assassins, get into misunderstandings with the city watch or, in extreme cases, withstand siege by a barbarian horde which burns the place to the ground. Life in a fantasy city is never dull, although frequently short.

In this series of articles I will be exploring the cities of fantasy. Some of these you may know well, and this will be an opportunity to reacquaint yourself with the seven tiers of Minas Tirith, the hills of King’s Landing or the gaslit streets of New Crobuzon. Others may be less familiar, and this will be a chance to find new strange new places to explore. Have you heard of Ba Sing Se, the Earth City that spreads for dozens of miles and is surrounded by towering walls thousands of feet high? Or Menzoberranzan, the city of the dark elves that lies like a deadly spider in the Underdark of Faerun? In this journey we may also visit Junon, a quaint fishing village turned into a massive energy weapon by the villainous Shinra Corporation, or the Imperial City of Tamriel with its circular walls and central tower. It is possible we will also visit the great floating metropolis of Armada, ploughing the seas of Bas-Lag, or the mountainous city-castle of Gormenghast. 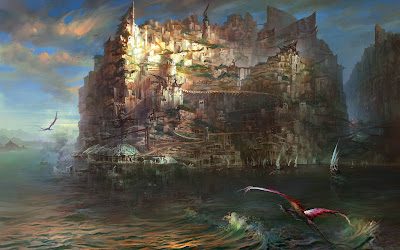 One of the newest cities in fantasy: Sagus Cliffs from the video game Torment: Tides of Numenera, released on 28 February 2017. Artwork by Chang Yuan.

There are also those cities whose streets may not be mapped so easily or reliable guides found. Nessus of the south, from where Severian set out on his quest. Unmappable Viriconium with its constantly shifting streets and locales. Amber, the one true world and city of which all others are faint echoes. And many more besides.

Finally, we will visit the greatest and grandest fantasy city of them all, Ankh-Morpork, City of (Swiftly Dashed) Dreams and City of Rapidly Monetised Wonders, as well as the famed City of What the Hell is That Smell. All life can be found in Ankh-Morpork, no matter if you want to find it or not.

But all journeys must start somewhere, and it makes sense for our first stop to be the place from which all others can be reached: Sigil, the City of Doors that sits at the very centre of the multiverse.

Thank you for reading The Wertzone. To help me provide better content, please consider contributing to my Patreon page and other funding methods, which will also get you exclusive content weeks before it goes live on my blogs. The Cities of Fantasy series is debuting on my Patreon feed and you can read it there one month before being published on the Wertzone.
Posted by Adam Whitehead at 19:21

Looking forward to reading these...

I gave you a donation, a few weeks ago, does that give me early access? If so how?

That's an excellent point and one I'm trying to find a way around. Doing it via Patreon is easy, but for people who've done a one-off donation it's trickier to provide a solution.

One option would be to PDF each entry and send that out as a separate mailshot. Requires a bit more organisation but should be doable.

Well however you do it, I look forward to it!
Have been visiting here for years (through SFF World originally), and I appreciate your opinions.