Patrick Stewart has announced that, at the age of 76, he has retired from playing the character of Professor Charles Xavier in 20th Century Fox's X-Men series of films. 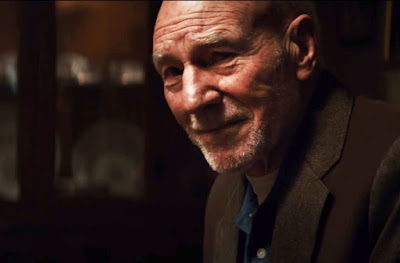 Stewart debuted in the role of Professor X in the movie X-Men (2000). He reprised the role in X2 (2003), The Last Stand (2006) and Days of Future Past (2014), as well as brief appearances in X-Men Origins: Wolverine (2009) and The Wolverine (2013). His final role as Professor X comes in Logan (2017), which also marks the final appearance of Hugh Jackman as Wolverine (although Jackman hasn't completely ruled out a comedic cameo in a future Deadpool movie, given his online banter with Ryan Reynolds).

Stewart's decision to leave the role is unsurprising. Given the events of X-Men: Apocalypse (2016) and the ongoing rewriting of the X-Men film continuity over the last few films, as well as Jackman's decision to retire, it's clear that Fox will taking future X-Men films in a different direction, perhaps leaning more on the new cast with James McAvoy playing the role of a somewhat younger Professor X, or even contemplating a full, from-scratch reboot after twenty years of the current, increasingly convoluted continuity.

Stewart was given the role by director Bryan Singer in 1999 following a fan campaign to have him cast in the role. It gave Stewart his second popular Hollywood role following his performance as Captain Jean-Luc Picard in Star Trek: The Next Generation from 1987 to 1994 and four spin-off films: Generations (1994), First Contact (1996), Insurrection (1998) and Nemesis (2002). During the making of the X-Men films Stewart met Ian McKellan and the two distinguished actors formed a strong "bromance" that has continued ever since (with McKellan officiating at Stewart's wedding).

Although Stewart has departed the role of Professor X, he will continue working as an actor on screen, on stage and in voiceover work. His next role will be as, er, Poop in the animated Emoji Movie.
Posted by Adam Whitehead at 00:33