HARMONQUEST returns for a second season 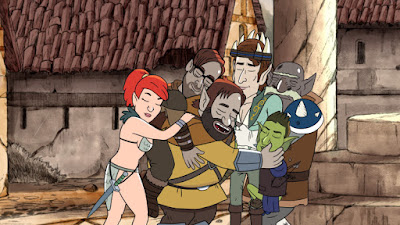 The first season of the show was one of the unexpected highlights of last year. It was very funny and revelled in showing the fun that people can have playing a pen-and-paper RPG. The season ended in an epic battle (where the regular crew were joined by Nathan Fillion) against the forces of evil and were triumphant, but at the cost of one of their number being sucked into a portal into an other dimension. It was a bit of a cliffhanger, which I assume will be addressed in the new season.

The second season will air on Seeso in the summer.
Posted by Adam Whitehead at 14:44

FYI, dunno if you're aware but J.V. Jones seems to be back and on Patreon now. See her Twitter for more info - not seen anyone post about it but I know you were looking into her whereabouts a few years back.