Once upon a time there was a writer named Lev Grossman, who worked for TIME Magazine and had literary ambitions. In 2005 he gained some attention when he called George R.R. Martin "The American Tolkien" in his review of A Feast for Crows. A few years later, having covered more SFF books, he decided to write his own. Faced with the daunting task of creating an original setting, cast of characters, themes to develop and trying to do something new, he gave up and instead mashed together The Chronicles of Narnia and Harry Potter. For added literary street cred he threw in some rich, good-looking New York kids whose lives were painful and agonising because of their wealth and having to attend college lectures a couple of times a day and having to tiresomely have sex with other rich, good-looking people. The result was a success! The novel, The Magicians, sold a lot of copies and he was able to stretch his thin narrative out across two sequels. 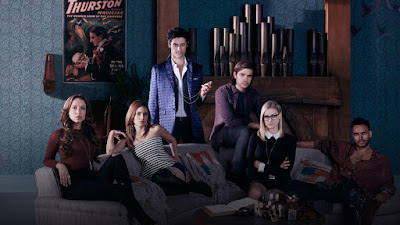 Now, and slightly inexplicably (given the number of actually-good SF and fantasy novels still stuck in development hell), it's been turned into a TV show. I imagine Grossman had in mind that the show would be adapted by a massive cable company like HBO and filled with top-tier actors, with high-level production values and the best scriptwriters in the business on the job. Instead, SyFy have turned it into a quick-turnaround popcorn show whilst their main talent is working on the infinitely superior The Expanse instead.

The Magicians, as in the TV show, is quite spectacularly awful and incompetent on a scale you just don't see on TV very much these days. Some modern shows can be boring, or not appeal to a wide demographic, or have structural or tone issues, but in the Golden Age of Television it's rare to see incompetence on this scale. The Magicians has almost no redeeming features whatsoever and borders on the unwatchable.

For starters, the script is awful. No attempt is made to make these characters even remotely sympathetic or interesting. The worldbuilding is thin to the point of non-existence. How the wider magical world works, what happens to evil wizards, why more people don't know about the existence of the other worlds despite magic being around for thousands of years etc is stuff that simply hasn't been thought through (unlike, say Harry Potter). The pacing is dreadful and the structure, which follows two separate storylines that are meant to hook up later, is constantly undercut by the characters from each story constantly bumping into the others, making the world feel claustrophobic and small.

Characterisation is something that happens in other series, not this one. I have no idea what motivates these people. Quentin, our main character, is whiny, weak-willed, selfish to the point of lunacy and tone-deaf to anything going on around him. I get he's suppose to be a difficult college kid, but usually these kind of characters have a redeeming feature, such as being smart or charismatic or funny, or they have unexpected skills. That never happens with Quentin. He's just a self-centred incompetent who spends most of the show whining about things.

Most of the other characters are likewise despicable, or treated with contempt, such as Alice. In the books she's a terribly-written, shy-but-ridiculously-hot cliche (even down to wearing glasses to show she's intellectual, but when she takes them off she suddenly turns into a sex bomb), which remains the case in the TV show. Crassly, the character in the novels is often referred to by her bra size and, jaw-droppingly, this continues in the TV show as well, along with many of the female castmembers appearing in states of partial undress throughout the show (Arjun Gupta, the show's sole good-looking male character, gets the same treatment as well in a vague nod towards equality). For a show made in 2017 it's oddly regressive in this area.

The acting veers from terrible to baffled: many of the cast seem really stymied on character motivation and what exactly they're suppose to be doing. This extends to the more experienced and otherwise dependable hands, like Battlestar Galactica's Rick Worthy as the show's Dumbledore analogue, who also seems to not have a clue what he's supposed to be playing. The sole exception to all of this is Esme Bianco as Eliza. Previously known for playing Ros in Game of Thrones, a very small role that usually required her to appear naked and not much more, Bianco is a bit of a revelation as Eliza, putting in a very charming and charismatic performance. If one actor emerges from this wreck of a show with improved career prospects, it should definitely be her.

The show's production values are also terrible, with some very poor CGI for the magical effects. Things are not improved when the show moves to Fillory. A magical and otherworldly realm, instead it across like the deliberately terrible fantasy world that Angel spent four episodes in, only worse.

It is instructive that shows like this and The Shannara Chronicles (although that may be harsh; for all its problems, The Shannara Chronicles is more entertaining) exist. We live in the so-called "Golden Age of Television" with so many rich and compelling TV shows around that it's not physically possible to watch them all. It's easy to forget the sheer amount of work that goes into making these shows so good, and they don't just roll out of a production line of awesome somewhere. The Magicians shows that if you don't stay on top of this work, it is easy to produce something that is so sub-par it wouldn't have passed muster thirty years ago, let alone now.

The first season of The Magicians (*) is an absolute train-wreck. The casting is weak, characterisation feeble, the script and dialogue are execrable and the production values shockingly poor. Avoid.
Posted by Adam Whitehead at 16:33

Wow, your reviews are generally very kind, even for the awful Shannara Chronicles. Given the way you don't mince words here The Magicians must be a pile of utter garbage.

This *was* my being very kind to THE MAGICIANS!

I will 100% agree with you on the source material. I read the first book, abandoned the series, and never looked back...until the TV show, that is.

Oddly, I really enjoy the TV incarnation of the world. None of your criticisms are off the mark and yet I find the characters endearing and vastly more sympathetic than the vapid eye candy that's found in the the Shannara Chronicles. Nor is the soundtrack as oddly intrusive and distracting as MTV's effort.

In the end I found the show utterly fails when compared to Expanse, Battlestar Galactica, or any other intelligent show with a real message to deliver. What I feel it does do, though, is provide a nice easy-to-digest confection in similar vein to early seasons of Buffy.

To each their own, but I'd recommend folks to give the first couple of episodes a shot before completely writing the series off.

Wow, I liked the Magicians, but couldn't make it past the premier episode of Shannara.

Meee-ow. Someone woke up grumpy.

I generally agree with at least the broad stroke of your reviews. In fact this site has turned me on to some of my favorite modern fantasy authors.

However, I respectfully disagree with you in this case. My wife and I found the show to be fun popcorn entertainment(but certainly nothing more than that).

But different strokes, folks and all that! This remains one of my all time favorite blogs.

I agree with David. I abandoned the book halfway through because I didn't like any of the characters and they seemed to be getting LESS likable as it went on, not more.

But, for some reason, I actually really liked the show. It's hard for me to pin down why, since I at least partially agree with everything you said against it. Just... something about it draws me in, in a bizarre popcorn way.

I also do like at least a couple of the characters. Eliot and Penny are fantastic, especially Eliot given that he has a somewhat more minor role.

I can't agree with any of your comments, except that Quentin is annoying as shit. IMO, The Magicians is much much better than Chronicles of Shannara.

Wow! I have to agree that you often go super easy on shows that don't always have a lot going on for them.

This review makes me realize that my decision not to watch this series (didn't care much for the books) was the right one.

I've known you since the wotmania.com days, Adam, and I've never read anything this negative coming from you. This must be crap on a spectacular scale!

Thanks for the review! =)

I really like the books - but didn't think the TV version was very good. It was a tough ask to translate it to TV, the books are very arch in tone, it all very meta and the characters are hard to root for. Not sure how they could have done it but I didn't like the casting or the tone.

I didn't remember you being that down on the Magicians the book (looking it up, you even went so far as to mildly praise it). Has the source text not aged well in your mind?

One of your best reviews. I actually enjoyed the first book despite how it sneered at readers, but felt -zero- compulsion to continue on with the too cool for school shtick. The show, OTOH, I tapped out after 1 or 2 episodes. I absolutely abhorred all the characters and thought the FX were Cheesecake Factory.

It got better. Not trying to get the final word in here, but the writing got better, the actors got better, and the whole show got better. They went into “uncharted territory “ after season 3, and, surprisingly, the writing got even better. (Imho) And closed off Season 5 in a nice fashion (drawing on book 3). I liked the books and eventually I really liked the show. Enjoy!