Richard Hatch, an actor and writer best-known for his work on the Battlestar Galactica franchise, has passed away at the age of 71 from complications related to pancreatic cancer. 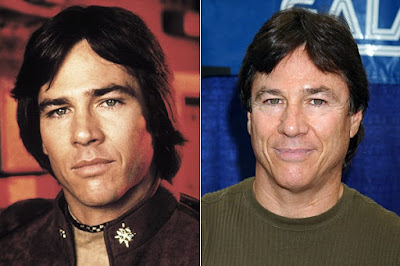 Born in 1945 in Santa Monica, California, Richard Hatch began acting in the Los Angeles Repertory Theatre in the 1960s. He broke into television in 1970 with a regular role on the soap opera All My Children. He left after two years and became a reliable guest star, appearing in TV shows such as Cannon, The Waltons and Hawaii Five-O. In 1976 he gained some acclaim and notice for his season-long recurring role on The Streets of San Francisco.

In 1978 he played the role of Captain Apollo in Glen A. Larson's space opera Battlestar Galactica. He played the serious straight man to Dirk Benedict's more flamboyant Lt. Starbuck, setting up a strong leading man double act. Hatch identified with the character strongly, as well as the epic story Larson was trying to tell. He was bitterly disappointed when the show was cancelled despite very strong ratings and declined to return for the heavily-derided, low-budget spin-off Galactica 1980.

Hatched continued to appear as a recurring guest star throughout the 1980s on shows such as Dynasty, Santa Barbara and Fantasy Island. In the 1990s he turned his attention back to Battlestar Galactica. Glen A. Larson had struck the terrible Galactica 1980 from the canon and planned a comeback series which would feature Apollo, and thus Hatch, in a leading role (effectively replacing his character's father, Commander Adama, after the death of actor Lorne Greene in 1987). Hatch wrote or co-wrote seven Battlestar Galactica novels in support of this effort.

In 1999 Hatch financed a trailer called Battlestar Galactica: The Second Coming as a proof-of-concept for a revival of the show. Universal, who then held the rights, decided to reject both The Second Coming and a pitch by Larson focusing on the missing Battlestar Pegasus for a complete, fresh reboot project from Star Trek writer Ronald D. Moore. The rebooted Battlestar Galactica launched with a TV mini-series in 2003 before becoming an ongoing series lasting from 2004 to 2009.

Unlike co-star Dirk Benedict, who was critical of the show's diverse casting and the recasting of his role with a female actress (Katee Sackhoff, whom Benedict later admitted was good in the role and met her for a coffee and photo-op in, appropriately, Starbuck's), Hatch was more open-minded about the reboot. To his surprise, he was offered a role in the series in the recurring role of former terrorist-turned politician Tom Zarek. Relishing the character, who was multi-faceted and complex, Hatch committed to the role and appeared in all four seasons of the ongoing show. He was written out in the final season, but criticised some of his character's final decisions as being uncharacteristic and bizarre (a view echoed by many critics), a shame after the much more nuanced portrayal of the character in the first three seasons.

Subsequent to his final appearance on BSG in 2009, Hatch created a new space opera franchise called The Great War of Magellan, consisting of a roleplaying game and comic book. He also appeared in the Star Trek fan film Prelude to Axanar as a Klingon general and was due to reprise the role in the full-length follow-up before this was canned by CBS and Paramount's legal department.

Richard Hatch was notable for his strong involvement with fandom and winning fan support for attempting to resurrect the Battlestar Galactica franchise. Although his project failed, it certainly helped contribute to the momentum that led to the franchise's return in 2003. Hatch also gave an excellent, layered and nuanced performance as Tom Zarek, a role that challenged him much more than the straightforward hero Apollo of the original series, showing that he was a much more capable actor than perhaps some had first thought. He will certainly be missed.
Posted by Adam Whitehead at 00:25