Harry Potter and the Philosopher's Stone

Twenty years ago, a children's book about a young boy fated to become a wizard was published. Along with its six sequels, it went on to sell half a billion copies and created one of the biggest film franchises in history. Reviewing it is only marginally less futile than reviewing oxygen, as you'll have likely watched this film years ago or already decided to never watch it at all. But the biggest fantasy franchise of the last generation is certainly something that should be up for review and criticism. 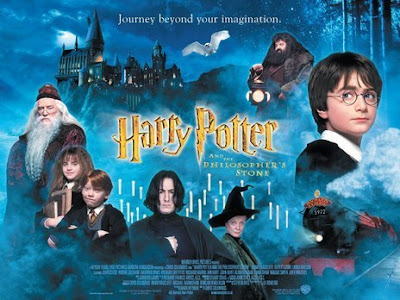 Harry Potter and the Philosopher's Stone (Sorcerer's, if you're of an American persuasion) was released in 2001, adapting the first book in the series. That first novel in the Harry Potter series is also the shortest, meaning that the film had to make very little alterations or changes to fit the entire story into one movie. This is something in its favour over the later films: as the novels got longer and longer, the films had to make more and more substantial cuts and alterations to maintain a coherent story on screen.

This first movie follows the book closely. We're introduced to Harry Potter, an 11-year-old potential wizard raised by his non-magical (or "Muggle") aunt and uncle after the murder of his parents at the hands of the evil wizard Voldemort during a magical war. Potter survived, somehow deflecting the spell that Voldemort tried to use to kill him back at its wielder, leaving a strange scar on his head. Voldemort hasn't been seen since and is presumed dead. Potter is rescued from the negligent care of his aunt and uncle to attend Hogwarts School of Witchcraft and Wizardry, where the reputation of his parents (and his own involvement in Voldemort's ultimate defeat) precedes him. At the school Harry makes friends with classmates Hermione and Ron and ultimately gets drawn into a disturbing series of events culminating in a showdown with a powerful magical foe.

The structure of the story is an extremely strong one. In the original novel Rowling set up Harry's world with skill and economy, establishing backstory, motivations and carrying out a fair bit of worldbuilding whilst also getting across a fairly intricate story, all in a very limited page count. The film does the same, with scriptwriter Steve Kloves and director Chris Columbus letting the story unfold with verve and economy. Columbus, a rather hit-and-miss director in his other work, knows when to let the story breathe and the camera linger on a magical moment and when he needs to get on with business and maybe cut some minor ancillary material from the book to accomplish that. Major set pieces from the book, like the Quidditch match, are fast-paced and exciting and the encounters with the shadowy figure in the forest and the final confrontation are effectively creepy. The highlight might be the life-sized wizard chess match, which is surprisingly brutal.

In terms of atmosphere and tone, Kloves and Columbus do mostly good work. In terms of acting and dialogue, the film is a bit less successful. Exposition is the order of the day and much of the dialogue, especially in the first half of the movie, tends to the clunky. The movie breaks the "show, don't tell" rule a few times, although it is able to deploy flashbacks to spice things up a bit. The adult actors also seem to start off struggling with their dry dialogue, with the notable exception of Alan Rickman who just commits 100% from his first appearance on screen, before getting to grips more with it later on.

Where the film lives and dies is on the performance of the three leads. Daniel Radcliffe, Emma Watson and Rupert Grint were all very young and inexperienced, and certainly give rough and unpolished performances. But they also have a huge amount of energy for their roles, making up in raw enthusiasm what they lack in experience at this stage.

The film is sixteen years old, so the CGI and effects have definitely dated, in some cases (particularly the troll, centaur and some of the actor replacement in the Quidditch match) quite badly. But for the most part it holds up well and the sets and overall production value remain impressive.

The biggest success of the film is that the film-makers recognise that the novels work because Rowling combined childhood whimsy with some very well-constructed worldbuilding and brief-but-effective moments of terror and action. This is a children's story, but one with some character and story depth to it.

Harry Potter and the Philosopher's Stone (***½) is at times a rough movie with clunky dialogue and stilted performances, not to mention some cliched British story tropes (like the elaborate private boarding school). But once it relaxes and gets underway, the story becomes more enjoyable and the performances more nuanced. A long way from being a perfect movie, it's certainly an entertaining one that opens the series very well. The movie is available now in the UK (DVD, Blu-Ray) and USA (DVD, Blu-Ray) as part of the Complete Harry Potter Movie Collection.
Posted by Adam Whitehead at 23:43