Ragnar Lothbrok is now the King of Kattegat, ruling over a host of lesser earls. He has also forged a strong alliance with King Ecbert of Wessex, enjoying more power and influence than any Viking king before him. Aware that his people still yearn for conquest and raids, Ragnar turns to his loyal Christian friend and advisor Athelstan, who tells him tales of a fabled city to the south called Paris. Ragnar becomes obsessed with tales of this city and soon has marshalled the might of the Viking nation against it. But his obsession comes at a very high cost. 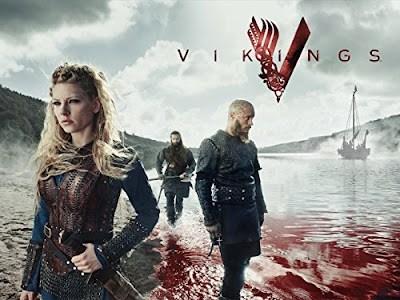 The third season of Vikings does not hang around. Having chronicled the (allegedly) reluctant rise to power of Ragnar Lothbrok over two previous seasons and nineteen episodes, the third season asks a more interesting question: what is he going to do with that power now he has it? We know that Ragnar wants to be more than a brute and a warmonger, he wants to be a statesman, a builder and a farmer, the man who brings his people out of their rocky homeland to a warmer place where the soil is better. But he is also not a fool, and knows his people still like to raid and to fight.

The result of this is a clever two-pronged strategy. Invoking the alliance forged with Ecbert last year, he plans to set up a Viking colony in Wessex. He also plans to appease his more combat-hungry troops by mounting an assault on Paris and carrying off its immense wealth. It's a clever plan which, you'll be shocked to hear, doesn't entirely pan out.

This season sees Viking at its most expansive. There's scenes in Kattegat, several other Scandinavian locations, Wessex, Mercia and in Paris. As well as Ragnar and his extended family and allies, there's also the royal families in Wessex and Mercia to deal with, and a whole new cast of characters in Paris to get to know, including the weak-willed King Charles the Simple, the more formidable Count Odo and the strong-willed Princess Gisla. The rising scale is handled well by the show. The producers deftly interleave a whole series of complex storylines (including a subplot where a very strange man shows up in Kattegat and causes chaos) with verve and skill. 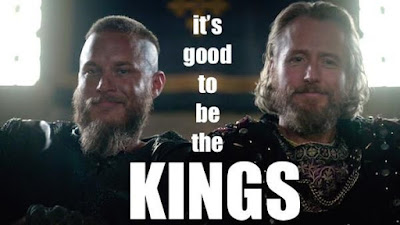 The show also continues to comment on larger-scale historical forces, religion and culture through some very personal character stories. There's the ongoing religious turmoil of Athelstan (and Ragnar's fascination with Christianity) and how this interacts with Floki's growing anger that the threat posed by Christianity to the Norse way of life is being ignored. There's Ecbert's ongoing clash between his acceptance of other cultures (there's a terrific and cynically honest exchange between him and Ragnar) but knowing that his priests and lords will not accept many concessions to the heathens.

The result is a rich tapestry of a show, with more going on than just the endless cycle of betrayal and counter-betrayal in the previous season. The last few episodes of the season then take things to the next level by depicting the full-scale Siege of Paris in all its glory. With lengthy, massive battle sequences that easily match anything in Game of Thrones, this season sees Vikings gain a scope and epic reach to match its already-impressive character work.

Sadly. it's downhill from there. I managed season 4 but gave up midway season 5.

Season 4 was split in two and it starts off poorly, gets decidedly odd in the middle, and then finishes fairly strongly. Season 4 definitely isn't as nuanced as the previous seasons.