THE EXPANSE Season 2 delayed outside the USA

Season 2 of The Expanse began airing yesterday in the United States on SyFy, to a strong critical reception. Fans outside the US were confidently expecting to watch the show today, as Netflix have picked up the rights outside the United States and their usual release schedule is one day after US transmission. However, this is not the case with The Expanse. Some sources are reporting that SyFy actually has an exclusivity period and the show will not be released on Netflix until Season 2 finishes airing in the States in May. 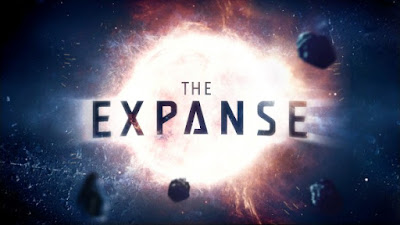 This is a very curious move. International sales are increasingly important to American shows, especially expensive ones (The Expanse is SyFy's highest-budgeted show of all time), and pre-selling a show's international rights to Netflix or Amazon for release within a day or two of the American transmission is a great way of ensuring a global audience is built up, fees are paid and piracy is minimised. Preventing the show from reaching an international audience for twelve weeks seems self-defeating, since this cannot but encourage piracy in the short term for the most devoted fans.

A spotty and poor international release scheme for The Expanse's first season (which was not available in the UK until the end of last year) was a big mistake and own goal for SyFy. This is not quite as bad a mistake, but it's a curious and backwards move which, once again, seems almost deliberately designed to stop the show gaining the profile and momentum it really needs.
Posted by Adam Whitehead at 19:07

It was on Space in Canada last night... I wonder if that's why Netflix doesn't get it right away - some countries have other distribution agreements?

Is the show taking a leaf out of George's book?

This is verry dissapointig if its true. Been counting the days.

Counting the days here too. I rewatched all Season 1 last weekend to gear up for this and I still don't see it in my Netflix !!!! (Japan)
This is bad... very bad....

"SyFy actually has an exclusivity period"

Except it isnt on SyFy in other countries, it isnt on amazon and netflix is S1 only.

The only way to watch S2 is to torrent it.

Having a global exclusivity period is possible, but it would be unusual and completely baffling. I agree that this is going to potentially hurt the Netflix ratings by encouraging people to torrent it. The argument that people can watch the show as soon as it's done in the US, so they'll only be a few days behind, isn't really helpful if you want to watch it along with your American friends. That kind of global watching buzz is really critical these days, which is what Netflix and HBO get. It's bizarre SyFy don't.

Well i pay for netflix and it is not there, but you can bet your ass i watched it anyway.
Just makes you wonder why you are actually paying for netflix...

So there is no need to pay for Netflix then. No season 2 available - I can watch it elsewhere.

Still doesn't appear to be available on Netflix in the UK as of June 18th.

Agh! Still not on Netflix UK as of June 2017.
It's based some books by James SA Corey right? Maybe I'll listen to the audiobooks of those in the mean time...