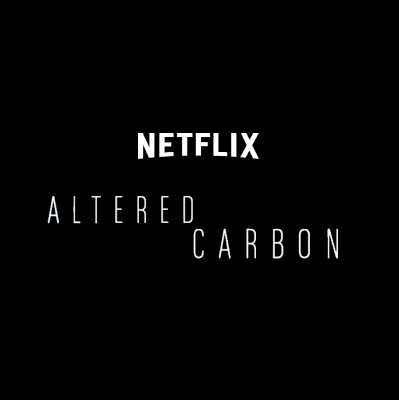 According to James Purefoy, the cast and crew are currently shooting the third episode of ten (shooting began in November in Vancouver). Purefoy describes the show as huge in scope, one of the biggest projects Netflix has attempted. Actor Joel Kinnaman confirms that the show has a bigger budget than the first three seasons of Game of Thrones (when the budget for that series grew from $6 million to $7 million an episode; Season 7 has a budget of over $14 million per episode, which Altered Carbon is unlikely to match any time soon).

No airdate for Altered Carbon has yet been set, but it is likely to be at the end of this year or early next.
Posted by Adam Whitehead at 21:57

I am absolutely RABID for this!, my favourite book (sci-fi and otherwise)

Have lost count of the number of times I've read and re-read
Keen to see how they're going to do justice to re-sleeving, are we talking quantum leap style mirror differentiation

OG Kovacs would be Takeshi's original body that he was born in.. probably for flashbacks to his childhood or envoy training.