Breq, the former starship AI-turned-military-officer, has secured the Atheok system and plans to wait out the civil war raging between the fragmented selves of Anaander Mianaai whilst investigating the ongoing mysterious events in the neighbouring Ghost system. But events will not wait for Breq and she soon discovers that the fates of everyone in the Atheok system may depend on what she does next. 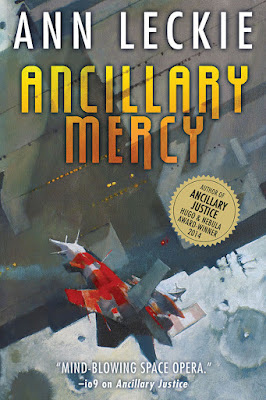 Ancillary Justice was a refreshing, smart and interesting science fiction novel. Its sequel, Ancillary Sword, was a major letdown, a work that sprawled and felt at times that the author wasn't sure what direction to take the story. Ancillary Mercy, which concludes the trilogy, ranks somewhere inbetween. This is definitely a more directed, more focused work that rounds off the thematic elements of the trilogy more or less satisfyingly, but on a more prosaic plot level is less impressive.

On the character side of things, Mercy crystallises when Justice did so well and Sword occasionally struggled with: the interrogation of self, identity and self-realisation. Breq is a creation of the Imperial Radch, but she is not Radchaii and can view their culture from both outside and the perspective of one of its servants. The Radchaii believe they are civilised, but they are also intolerant and imperialistic, stamping their identity on the civilisations they encounter. They are baffled by the idea of ethnic and religious differences amongst their more newly-conquered subjects and resort to violence a little too readily. Breq - ironically - is a humanist who abhors violence when it can be avoided and seeks understanding and diplomatic resolutions to crises, which confuses a lot of her supposed "fellow" Radchaii.

This internal cultural examination is successful, but ultimately doesn't expand much beyond what we learned back in the first novel: the Radchaii should chill out and stop killing people, basically. Much more interesting is the examination of the nature of identity and the interrogation of the nature of both Breq and the other AIs. This leads to a bit of an unexpected plot twist that satisfyingly helps tie up the story at the end of the book.

That story, however, is not the story that many readers thought they were reading about: the war between the Anaander Mianaai clones. This doesn't really end or peak in the book, and carries on after the novel ends. On a thematic level this is quite understandable: the war has been going on clandestinely for a thousand years, so it being wrapped up neatly in three books covering a couple of years is unlikely. On a plot level, however, it can't help but feel that Leckie has left plot hooks dangling for future books (and more novels in the Radch setting are forthcoming), which is fine but feels perhaps a little disingenuous for a series marketed firmly as a trilogy.

At the end of the book there's a big climax and a smart and clever ending which makes the trilogy certainly feel worthwhile. It's an interesting, thought-provoking series. But it's also one that feels passive and inert for a lot of its time, with a huge amount of important stuff going on behind the scenes or resolutely off-page. It can make for a series that's hard to love but easier to admire and respect: Leckie is dealing with a lot of ideas here and doing so in a manner that's often quite subtle.

Ancillary Mercy (***½) is a worthwhile, humanist finale to the Imperial Radch trilogy, but it isn't the grand, epic and stirring ending that I think some people were expecting. It is available now in the UK and USA.

Provenance, the next novel in the Imperial Radch setting (but not a direct sequel to this trilogy), will be published on 26 September 2017.
Posted by Adam Whitehead at 14:15