On Terry Pratchett's explicit instructions, the last novel he was working on at the time of his death and notes, fragments and outlines for several more books have all been destroyed. A six-and-a-half-ton steamroller named "Lord Jericho" was used to flatten the hard drive containing the notes and outlines. 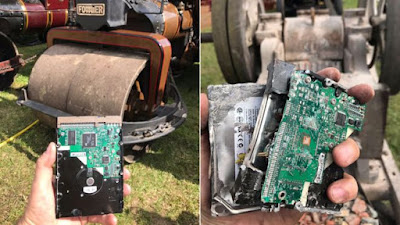 The famously prolific Pratchett - he wrote 41 novels in his Discworld series alone between 1983 and 2015 - usually worked on several projects simultaneously. He did not want his unfinished work being used to churn out more books after his death to make money, hence the instruction to his assistant and literary executor Rob to make sure no-one could do so.

Details on the in-progress works are scarce, but it is believed that Raising Taxes - a fourth and possibly concluding Moist von Lipwig novel - was among the ideas Pratchett had sketched out. He'd originally planned this to be the third Lipwig book, but superseded it with Raising Steam.

Pratchett fans will no doubt be happy that his last wishes were respected, but it is still intriguing that we'll never know where Pratchett planned to take his signature creation next.

Before his death, Pratchett did give his daughter Rihanna (a long-term writer in journalism and video game writing) tacit permission to write Discworld novels, but she chose not to pursue this idea. Instead, she is working on adaptations of Pratchett's work for the screen, such as the long-gestating City Watch TV series.
Posted by Adam Whitehead at 14:54

About 3 years ago i wrote a fan mail to sir Terry suggesting that he should dedicate de 42nd novel to Dougles Adams stating that this book contains the "Answer to the Ultimate Question of Life, the Universe, and Everything". Now it seems fitting that all the answers continue to remain a mistery...