Disney and Lucasfilm have quasi-confirmed that the 2020 Star Wars movie will be a stand-alone prequel focusing on Obi-Wan Kenobi, surprising exactly no-one but still pleasing a lot of people anyway. 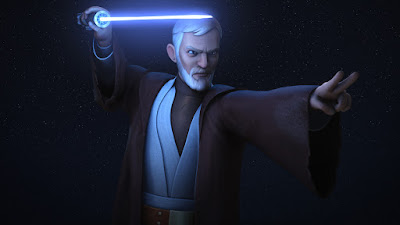 The next Star Wars movie will be Episode VIII: The Last Jedi, directed by Rian Johnson and due out in December. This will be followed by a Han Solo-focused prequel move in 2018, currently still scheduled for May 2018 but after a chaotic shoot and the firing of the directors (and their replacement with Ron Howard), this may change. Episode IX is then scheduled to follow in 2019, directed by Jurassic World director Colin Trevorrow. Disney had pencilled in a third stand-alone movie for 2020 but had not confirmed the premise, apparently considering competing ideas focusing on Obi-Wan, Boba Fett or Yoda.

The Obi-Wan movie originally sounded like the least likely of the three ideas, but Ewan Mcgregor enthusiastically endorsed the idea, pointing out that he's now the right age to play Obi-Wan mid-way between his exile to Tatooine in Revenge of the Sith and his return as an old man in A New Hope. The animated series Star Wars: Rebels, which also teased some ideas for Rogue One in its second season, seemed to back this up with a storyline featuring Obi-Wan on Tatooine, looking over Luke from afar and battling a resurrected Darth Maul thirsting for revenge (it's better than it sounds).

Lucasfilm are apparently in discussions with Stephen Daldry, the director of Billy Elliott and The Hours, to helm the film, suggesting they may be open to considering a more character-focused movie. Mcgregor is not yet officially attached, but I have a hard time believing that Disney wouldn't tap him for the project.

As for story ideas, whilst it's generally assumed that Obi-Wan spent nineteen years just hanging out on Tatooine, it is perfectly possible that he did take off for some solo adventures in that time, maybe keeping tabs on Luke through the Force or something. Basically, I don't care and just want to see Ewan Mcgregor playing Obi-Wan in a movie that isn't awful.

More news as we get it.
Posted by Adam Whitehead at 19:58