2010. Two brothers, Ray and Emmit Stussy, have been feuding for years over the inheritance from their late father. Emmit took his part of the inheritance and transformed himself into a millionaire, the "Parking Lot King of Minnesota". Ray took his part, his dad's car, and did nothing with it. Fuelled by bitterness and resentment (and his new girlfriend, Nikki Swango), Ray plots to get even. The result is a case of mistaken identity, a spate of killings and the hostile takeover of Ray's company by a mysterious Englishman named Varga. Caught in the middle is Gloria, a police officer whose imagination is fired up by the case but whose new boss is keen to sweep it under the carpet as soon as possible. 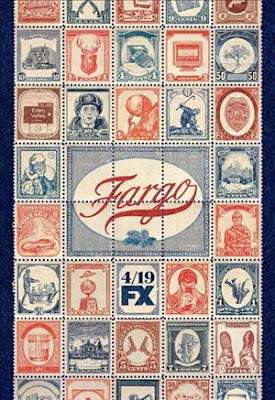 Fargo is an anthology series where each seasons forms one complete, self-contained story, each story linked to the rest (and to the original 1996 Coen Brothers movie) by a shared background. The third season is set five years after the events of the first but has almost no characters in common (one, relatively minor Season 1 character does show up later on though), although some background elements and similar themes are explored. What this season does share with its two forebears is an off-kilter, bizarre atmosphere and some rich, satisfying dialogue along with absolute killer performances by some exceptional actors at the top of their game.

Leading the charge this time around is Ewan McGregor. McGregor is always a fine actor, but is utterly exceptional in Fargo, playing the brothers Stussy with flair and wit, imbuing each brother with a different personality and even physical sensibility. It's not quite at Tatiana Maslany levels of exceptionalism as a multi-character performance, but it's an impressive piece of work. The other heavy-hitters, David Thewlis and Mary Elizabeth Winstead, are also superb but the higher-profile actors' work is almost stolen out from under them by the lesser-known Carrie Coon as Gloria, who is charismatic, funny, passionate and smart. There's also a host of scene-stealing performances from other actors in smaller roles, such as the always-fantastic Mary McDonnell, Olivia Sandoval as another police officer and Shea Whigham as the PTSD-suffering new police chief who is looking for a quiet life.

The third season is still off-kilter and bizarre, featuring an extended animated story about a robot travelling into the distant future, an awful lot of people playing Bridge and some slightly surreal sequences in which an all-knowing character (played by Ray Wise) shows up to comment on the metanarrative. There's also a whole episode set in the distinctly non-Minnesotan location of Los Angeles, just to mix things up a little. Those hoping for closer ties between the seasons may be disappointed; one minor Season 1 character showing up in a recurring role and a few nods to the bizarre UFO scene in Season 2 aside, this season stands mostly alone.

However, the third season of Fargo does have some problems. Season 1 of Fargo is probably the single finest season of television made in the last ten years and was utterly sublime and pitch-perfect from start to finish. Season 2 had a slower start but eventually got up to speed and almost rivalled the opening season. Season 3 starts very strongly, with a compelling story, richly-detailed characters, but then goes off the rails a bit. Producer-writer Noah Hawley seems to feel the strain of going back to the well for a third time and there's a lot of make-work mid-series as he tries to delay Gloria solving the murder mystery pretty much straight away. Fargo has never been necessarily rooted in outright realism, but some of Varga's abilities as he stays one step ahead of everyone seem quite ludicrous even by this show's generous standards. In fact, the characters are painted a little more broadly than in previous seasons, slightly larger than life without the grounding family roots the likes of Molly and Peggy had in previous seasons. This is still fun, but a little depth has been lost along the way. There's also the issue of violence: Fargo has never shied away from spilling blood when needed, but Season 3 gets a little trigger-happy and ends up wasting most of its cast by the end, often in ways that feel random rather than rooted in the needs of the story.

The show eventually circles back round and delivers a thrilling finale rooted in a fantastically-played central question: is the world good and does justice exist, or is there no justice and are those who do evil always doomed to get their comeuppence? The show doesn't offer an easy answer, but frames the question extremely well.

Season 3 of Fargo (****½) is the weakest to date, which is to say it's still probably the best-acted, best-shot and one of the best-written and directed shows you'll see this year. It struggles for pacing and energy a little more than the first two seasons and the news that there'll be a two-to-three year hiatus before Hawley returns for a fourth season does feel like a wise move. The series will be released in October 2017 on DVD in the UK and USA (and hopefully Blu-Ray, but there is no listing yet).
Posted by Adam Whitehead at 19:52

Wert, did you see Legion and, if so, any thoughts?