Sarah Manning is trapped and wounded on Revival, a secret Neolution island hideout in the Canadian Arctic. As she struggles to escape, Cosima learns of the history of the Neolution movement and some of the struggles it has faced to survive and make human cloning a reality. The moment Neolution has been working towards for decades is at hand and Sarah's daughter Kira will play a key role...if Sarah and here sisters will allow it. 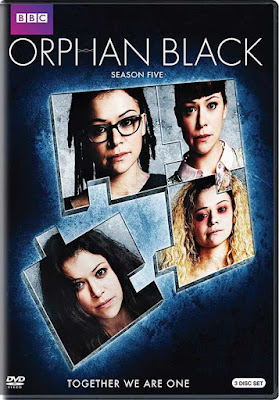 Orphan Black began in 2013 as a mystery drama focused on the suicide of a young woman, witnessed by her exact duplicate. Since then the show has moved from corporate drama to soap opera to a demented vision of suburban hell, all the while rooted in Tatiana Maslany's flawless, jaw-dropping portrayal of half a dozen different-but-identical characters at the same time, backed by an ample array of supporting castmembers. It's hard to argue that the show hasn't taken wrong turns - the "male clones" storyline in Season 3 was never as compelling as it should have been and too many strong supporting characters have ended up benched with nothing to do (hi Art) - but for the most part Orphan Black has been a compelling, rich drama.

The fifth and final season of the show features both the best and worse excesses of the show. On the minus side, there's a lot of characters grumbling in comfortable offices about cloning and cells and test tubes and Sarah's daughter is really important because of vague reasons. We've seen this storyline before for four previous seasons and it's gotten a little old by this point. We're more invested in Rachel as a character at this point so her POV is interesting in this world, but ultimately the reveal of the Real Big Bad of the Entire Show is a letdown. The first half of the season, which features an uneasy alliance between Team Sarah and Neolution, feels like it's grinding its gears a bit too much.

The latter half sees things improve. Once again there is a solid enemy to fight and the show unexpectedly develops teeth. Orphan Black has always been a ruthless show - remember it started with a young woman throwing herself in front of a train and a murderous assassin slaughtering her own clones with wild abandon - but as it heads towards the endgame it becomes quite astonishingly ruthless, slaughtering most of the extraneous secondary cast of the show with enthusiasm. Some of these deaths hit hard and their ramifications are explored, but others feel far too off-hand and feel like the writers wanted to close off a number of storylines that otherwise would be left dangling.

This would be more effective if they still didn't end up leaving a lot of stories underserviced: remember Cal, Sarah's on-off boyfriend and Kira's father? Or the shadow organisation Topside? The writers clearly chose not to revisit some plot elements, especially ones that people had forgotten about, but I suspect these dropped storylines will be more glaring for future viewers watching the show's relatively modest 50-episode full run in one go.

The show's final two episodes deliver a surprisingly low-key ending: villains are defeated, good guys are saved and the sisters come together to ask the question, "What next?" And surprisingly we get a lot of examination of that question, particularly how it pertains to Sarah. When we first met Sarah she was a screw-up and the crazy situation with her newly-discovered sisters gave her a focus and purpose in life. When that situation is resolved for good, she finds herself questioning her purpose and her point in life, and the show brings things full circle by contrasting Sarah as she is now with how she was at the start. This is a tremendously powerful way of ending the show, delivering the end to a thematic arc that a lot of viewers could have been forgiven for forgetting about. Ultimately Orphan Black wasn't about the dazzling visual effects that allowed Maslany to play four distinct characters in one shot simultaneously, it was about each of these flawed and human people, and in the finale the show resolves those character arcs with tremendous skill.

Orphan Black's fifth season (****) overindulges in the show's tendency towards repetitive and tiresome conspiracy theories in its opening half, but later on reasserts itself by refocusing on its core characters and bringing them all to an appropriate, powerful ending. The show will be released on DVD and Blu-Ray in the USA in September 2017, with a UK release to follow. However, the entire series is available now on Netflix in the UK and Ireland.
Posted by Adam Whitehead at 19:57

I remember first watching the show not expecting much from it but was quickly blown away by Tatiana Maslany. She is the whole reason why the show works and now with 'Stronger' she's on to bigger and better things. As for the final season, I think it's a tale of 2 halves really. The first half, they were setting things up for the finish of the season. In the second half, they were sort of trying to finish things up as much as possible. On the whole, Orphan Black was a good show and I would recommend it just for the performance by Maslany.

Warning- Shameless Plug
I just wrote a book titled 'Fantasy Begins' by Roy Lim and it is now on Amazon. It's a fantasy-comedy about a world turning from a Conan-like Sword & Sorcery world into one of High Fantasy. Please take a look.

Just finished season 4 which was rated with 5 stars here.

I simply cannot agree that this series is still in any way good or unconventional.
The first part with Beth was acceptable and interesting because we got answers.
Then: weeping clichés. Again another higher ranked conspiracy, and again another unnecessary resurrection of a very annoying character, and again a bad Rachel, and, and, and, and much of the same with maybe a new but very lousy researched Mika (btw a male name).
In the end this season was just frustrating, filled with plotholes and not very clever twists. So much potential for just ... what?
I had the feeling that super-Sarah would survive every idiotic aggressive act, just because she is Sarah the toughest of them, the Iron Man in punk clothes who survives each and every wound.

There could've been done so much more to the story, but that was a hope I lost early in season 2.
The only reasons for still watching the show are Tatiana Maslany and Jordan Gavaris.
I doubt season 5 can save the day.

My hope is that Mr.Robot will not suffer the same fate with a very mesmerizing main character. But also, the story seams to go nowhere anymore. Hope season 3 will overcome this feeling.

To darkul;
Season 5 is more 'close the story' than 'save the day' but I agree with you on the various clones. Not all of them had good arcs, I personally can't understand why they had Tony Sawicki in the story, but on the whole I thought most of the clones were interesting.
As for Mr. Robot, I still hold out some hope. Season 2 was nowhere near as good as Season 1 but hopefully it was just a small bump on the road to greatness.