David Tennant and Michael Sheen to star in GOOD OMENS

In possibly the best and most appropriate casting news ever, British actors Michael Sheen (Masters of Sex, Frost/Nixon, Twilight) and David Tennant (Doctor Who, Jessica Jones) have been tapped to play the leading roles in the Amazon/BBC adaptation of Terry Pratchett and Neil Gaiman's 1990 novel Good Omens. 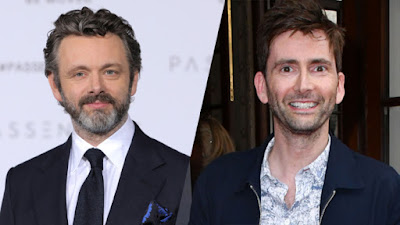 Sheen will play the angel Aziraphale and Tennant will play his redoubtable friend, the demon Crowley. The story revolves around the end of the world and the emergence of the Antichrist, but as the forces of good and evil ready themselves for battle, Aziraphale and Crowley realise that actually the world is kind of fine as it is and join forces to stop the end of everything.

Pratchett's own Narrativia Productions, now run by his daughter Rihanna, will co-produce the series alongside Amazon and the BBC. It will be a six-episode mini-series.
Posted by Adam Whitehead at 10:22

As with all David Tennant casting news, the only really important question is: will he have to do an English accent, or be allowed to use his natural voice?

On paper, this looks like good casting. After his role as The Purple Man in Jessica Jones, it'll be interesting to see what David Tennant can do as Crowley.