CBS's Star Trek: Discovery finally starts airing in September and it'll be interesting to see how well the show does. The series has already made a strong profit from overseas sales (mostly through Netflix) before it even arrives on CBS All Access in the United States, so it will be interesting to see how well it does. However, not willing to let the grass grow below their feet, CBS are already planning a second new Star Trek series. 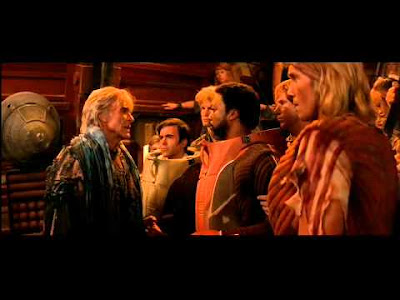 Anyone up for 10 episodes of Khan hanging out in a spaceship in a desert? Anyone?

This new idea is...a bit unnecessary. Nicholas Meyer, who has been providing writing and production assistance on Discovery, is revisiting arguably his greatest triumph - Star Trek II: The Wrath of Khan - to plan a series (possibly a limited mini-series) exploring what happened to Khan and his band of genetically-engineered exiles on Ceti Alpha V during the fifteen years between the Original Series episode Space Seed and the events of the movie.

I should, of course, point out that The Wrath of Khan answered this pretty well: the guys and girls played chess a lot, read Moby Dick way too much, and a bunch of them died. And that's kind of it.

CBS, please listen. What most fans want is a new series set 20+ years after the events of TNG, DS9 and Voyager, really exploring the Final Frontier and setting up new characters and events that should have the chance to be as iconic as what has come before. This constant stream of reboots and prequels is unoriginal and denying a new generation of viewers the chance to get their own crew of characters to relate to. I suspect Discovery will be good and this new Meyer series will probably be good, but neither have the freedom to tell stories the way they may want, as both are handicapped by canon and continuity (or risk ignoring it and irritating fans, as the unwarranted changes to the Klingons have already shown). Let's see something new, cool and interesting.
Posted by Adam Whitehead at 19:29

Do fans >really want a series set after TNG/DS9/VOY, or is that just what they keep telling themselves? DS9 explored the heretofore unseen Gamma Quadrant, VOY the heretofore unseen Delta Quadrant. I mean, that's about as unknown as you can get, right? Would a series set after that really be breaking new ground? These two series that went well out of their way to explore new ground hardly excited fan interest on those grounds alone. Fans don't know what they want.

I'd love a post DS9 Star Trek Show. I agree this constant prequel making is just pissing off those of us who care about canon. Seeing the long term effects of the Dominion War would be very interesting.

if they want something new, & from the past, go back & show a society, much like today - where people start implanting computer chips that tie to their central nervous system so they can retain more memories, & expand their thinking, have shared resources, but then an overreaching govt uses a law like the patriot act, to record their thoughts, & the whole thing spirals out of control ..... creating the borg, the early years.

Post Voyager would be awesome. No more worries about Canon, time-lines, characters, etc.etc.

Most fans want fresh new storys of the future, hardcore star trek fans aren't happy with the cannon being tossed about or rebooted. We want the final frontier even if it's not the enterprise it will breathe new life into the franchise if done correctly

I am conflicted about your assumptions on what Star Trek fans want. First of all, hell yeah, I want that! But then again, Star Trek was never about that. Let me explain.

When I think Star Trek (and I admit it is a generational issue - pardon the pun) I think Next Generation, I think Picard, I think bold exploration of social and personal issues using SF as a shortcut through the exposition. And I get what I want with (who would have thought?) The Orville! It is by far the best NG sequel series yet.

What I also think about when thinking Star Trek are the original series movies and the NG in-series movies (mainly the Borg and other two episode length stories). These were not cinema quality films, but a kind of bonus for the series, which provided hard sci-fi, terrifying enemies, large stories that could not have been explored by a mere 40 minute episode. And I think this is where Discovery wanted to go, but isn't quite there yet.

And yet, when I think Star Trek I also think of the first half of the first season of Enterprise, which is the true prequel of them all and which got stupid (as most SF does) when they started using time travel. It provided a low tech (relatively speaking) start of space exploration story which is now forever ruined (unless taken over by another good Samaritan and remade Orville style).

The problem is not the rebooting or the prequels, but what movie corporations understand by that: Puppets and toys, not characters; lens flares, not social commentary; theater movies, not 22 episode TV seasons; bigger is better. The problem is that CBS wants people to forget Picard and go with the rebooted cowboy paradigm. People loving intellectual dilemmas are not people who will spend money impulsively, so they are not an audience. CBS would ship them all in the Delta quadrant if they could.

Let's admit it: there are at least two separate Star Trek fan groups out there. One is old and nostalgic about William Shatner the other one is slightly younger and thinks of Picard. What CBS wants is actually neither.