Christmas, 2054. The 'net' is a technological breakthrough, a device which allows people to travel back in time to observe the events of the past. Historians use the net to go back and observe history in progress, but anachronisms and those intending to change the past are not permitted through. Whilst the net has mostly been used to travel to relatively recent periods of history, the Mediaeval department of Oxford University is preparing to send a young student named Kivrin through to the year 1320. No sooner has she gone through, than chaos erupts: a virulent disease sweeps through Oxford, striking down most of the populace and a quarantine is enforced that prevents the faculty from retrieving Kivrin. Back in the 14th Century Kivrin becomes used to living in the Middle Ages, which none of her training has really prepared her for, but it soon becomes clear that something has gone horribly wrong, and she is not when she is supposed to be... 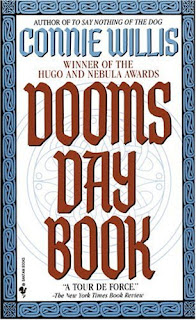 Doomsday Book was originally published in 1992 and won both the Hugo and Nebula awards for Best Novel. It mixes elements of traditional time travel stories with elements from a disaster movie: Kivrin is trapped in the past and her friends in the present are unable to help her as they themselves are dealing with a pandemic. This is a nice spin on the cliche, with the present-day storyline given just as much attention (if not more) than Kivrin's misadventures in the past. The notion of disease and illness lies at the heart of the book, and seeing how futuristic medicine can barely stop the pandemic from killing people makes the sections set during the Black Death even more horrific in comparison. The novel also acts as a curious comedy of manners, or even a farce, with characters' own blinkered viewpoints and opinions mean that they are unable to effectively deal with the unfolding crises. At times this makes the book a frustrating experience, as some characters are obtuse to the point of total ludicrousness and gives an oddly tonally inappropriate dose of humour to the novel.

What keeps you reading is the depth of research that has been done here: 14th Century England is brought to life vividly, with the characters painted richly and convincingly. Unlike a lot of writers (such as say Ken Follett, whose Pillars of the Earth is an utterly unconvincing depiction of medieval life), Willis makes the point successfully that the medieval period was one where people's beliefs and thoughts were totally alien to our own, and understanding how they thought and acted on a day-to-day level is extremely difficult. She succeeds at this admirably.

The 21st Century sections are less successful, mainly due to the stupidity of certain characters meaning that you lose any belief that these people would actually attain the roles or positions they have. There are also a number of plot strands in this sequence which are completely left unresolved: it's never made clear if it was user error or a deliberate act by Gilchrist that resulted in Kivrin being sent to the wrong year, and the mystery of what happened to Mr. Basingame, who vanishes before the book even starts and whose fate is much debated by the other characters, is never answered. The lack of communication between major characters is also completely unbelievable and adds to the frustration levels of the novel.

Doomsday Book (***½) features some stunning and deeply affecting sequences set in the 14th Century. Those set in the future are less compelling, and there are some moments of reader frustration to be had, but overall the book remains a vivid and memorable reading experience. The novel is published by Bantam in the USA. It doesn't currently have a UK publisher, but the US version is readily available from Forbidden Planet or via Amazon.co.uk.
Posted by Adam Whitehead at 18:16