The successful SF sitcom Red Dwarf is to return to British TV screens after a ten-year hiatus. The original series aired eight seasons and 52 episodes from 1988 to 1999, becoming BBC-2's longest-running sitcom (a record still held to this day) and winning audiences of over 8 million in its heyday, sometimes demolishing the opposition on the mainstream channels of BBC-1 and ITV. After Doctor Who, it is the most successful SF show produced by the BBC in terms of revenue generated and international sales, with enormous success on both VHS and DVD. There was even a pilot produced for an American version of the series in 1993, but this didn't lead to an ongoing series. 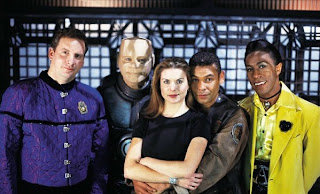 The premise has the five-mile-long mining ship Red Dwarf on an extended tour of the Solar system, conducting mining operations on several moons of the outer gas giants, when a lethal radiation leak wipes out the entire crew, with the sole exception of Third Technician Dave Lister, who has been sentenced to a disciplinary spell in stasis after smuggling a pet cat on board through quarantine. To avoid exposing other humans to the danger, the ship's AI, Holly (IQ 6000), takes it out of the Solar system and into deep space. Once the radiation has died down to a safe background level he releases Lister from stasis. Unfortunately, this takes three million years. Lister finds himself alone in a remote part of the Galaxy, possibly the last human alive, with only a senile computer for company, so Holly resurrects Lister's direct superior officer, Second Technician Arnold Judas Rimmer, as a hologram to 'keep him sane'. They also discover that thanks to the radiation leak, Lister's cats' descendants have evolved into a humanoid form and left the ship, leaving behind only one representative. Lister, Rimmer, Holly and Cat take the Red Dwarf back to Earth, eventually being joined by a robotic janitor named Kryten. Along the way they have various comic adventures.

The series was created by Rob Grant and Doug Naylor, who co-scripted the first six seasons. The series' success was put down to its everyman hero, Dave Lister, who has zero knowledge of astronomy or physics, and the relationship between him and the impossibly arrogant and incompetent Rimmer. Also, the show utilised quite complex SF ideas such as quantum theory and parallel universes to carry forward its comedic plots, rather than simply laughing at the genre. After the sixth season aired in 1993, Rob Grant decided to leave to pursue a solo writing career. There was also a lengthy hiatus brought about by the cast pursuing other projects. When it returned for its final two seasons in 1997-99 it was noticeably bigger-budget and slicker, but the writing was definitely a lot weaker and relied on already-existing storylines, characters and injokes rather than creating new material. Despite this the series achieved record audience figures for its final season.

Doug Naylor then chose to spend the next several years trying to find backing for a movie version of the series, coming close to a deal several times, but each time being disappointed. He officially abandoned the project last year and reopened negotiations with the BBC for the series to return. With the enormous success of the resurrected Doctor Who and the huge DVD sales of the series (Red Dwarf has sold more DVDs than any other British comedy series bar only The Office), he assumed that the BBC would be interested in a new series, but was surprised when the network told him that the show was "Too commercial," for them to consider at the time.

However, whilst the BBC itself was not interested in the show returning to its original home on BBC-2, BBC Worldwide, the commercial arm of the organisation, agreed to co-fund a revival of the series along with the Freeview channel UKTV. After some discussion, it was agreed to fund four new half-hour shows. The first will be a documentary about how the show has survived and its popularity has grown during the decade-long hiatus. The second and third will be 30-minute new episodes with the return of the full cast, and the fourth will be a clip show 'with a difference'. The four episodes are in production now and are expected to be aired some time in 2009 on UKTV's affiliated channel Dave.
Posted by Adam Whitehead at 20:27

Adam, you've just made my day after reading this. Now there's another things I'll be impatient for...

Yay! Smegging excellent. Don't know how I missed this nugget ... but thanks Adam.