The Dragon Reborn by Robert Jordan

The Dragon Reborn - as I am sure most people have guessed - is the third volume in Robert Jordan's The Wheel of Time series and was originally published in 1991. It is notable within the series for marking the end of the 'adventure' phase of the series. After this book on, the main characters start becoming major players in the politics of the world. 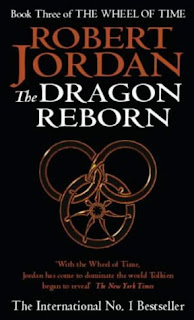 The Dragon Reborn picks up a few months after the end of The Great Hunt. With the invading armies of the Seanchan driven back into the sea, Rand al'Thor has also defeated Ba'alzamon for a second time, but their battle was seen in the skies above the city of Falme. Rumour is spreading that the Dragon has been Reborn and the kingdoms of the west - Tarabon and Arad Doman - have been plunged into war and civil war. Torn by self-doubt over whether he is the real Dragon Reborn, Rand decides to prove it once and for all by travelling to Tear. The fall of the fortress that guards the city, the Stone of Tear, is the greatest sign in the Prophecies of the Dragon that the true Dragon has emerged. Whilst Rand proceeds on his own, Perrin, Moiraine, Lan and Loial pursue him. Meanwhile, Egwene, Elayne and Nynaeve have returned to the White Tower but rather than face a heroes' welcome for their part in the defeat of the Seanchan, they find themselves accused of being runaways. As they struggle for acceptance, they also learn of a new threat to Rand, which will also take them to Tear.

The Dragon Reborn is a pretty tightly-focused book, with three major storylines proceeding in tandem and events driving the characters in all three arcs to a major convergence in the city of Tear. The biggest surprise of the novel is that the central character of Rand, who drove the first two novels, is all but absent from this third book. Instead, most of the book is related through his two friends, Mat and Perrin, and the trainee Aes Sedai as they are dispatched on a dangerous mission by the Amyrlin Seat. A number of interesting new characters also appear, such as the thief-taker Juilin Sander and Zarine 'Faile' Bashere, who is probably among the most unpopular characters in the books (although I always found her tolerable, at least up until the last few installments). The (relatively) rapid intercutting back and forth between the three storylines makes this feel like the shortest book in the series. In fact, with the possible exception of some of the toing-and-froing in the White Tower, the book has remarkably little filler or fat to wade through, making it among the fastest reads in the series. 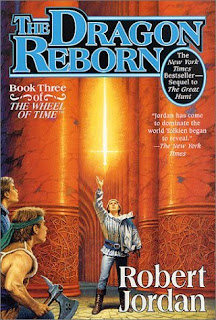 Are there any complaints? Well, the overall story is becoming a little too reliant on plot coupons: the Horn of Valere and the cursed dagger in the second book, the dreaming ter'angreal and the sword housed in the Stone of Tear in this one. The book is also mostly taken up by characters travelling from one point to another, making it feel rather transitional. Balanced against that is some excellent character development (most notably for Perrin, who was low-key in the second volume as he struggled with his own problems but in this volume makes important progress to finding a new role in life) and a much greater focus on Mat. Whilst the other characters have the weight of the world on their shoulders, Mat fairly consistently throughout the series comes across as the most fun character to read about, and his adventures in this book are memorable and set up a lot of future plot developments in an entertaining manner. There's also the introduction of certain metaphysical concepts such as the World of Dreams, which adds a fascinating psychological/metaphorical side to the more mundane epic fantasy trappings of the story.

The Dragon Reborn (****) is another enjoyable addition to the overall series which tries some new things (pushing Rand out of the limelight) and generally pulls them off. The novel is available in the UK from Orbit and in the USA from Tor.
Posted by Adam Whitehead at 15:51

Email ThisBlogThis!Share to TwitterShare to FacebookShare to Pinterest
Labels: robert jordan, the dragon reborn, the wheel of time

I mostly despised Faile because she was, to be frank, a bitch, and what's worse is that she basically existed for one reason for most of the series: to be the love interest of Perrin. Matt's relationship with Tuon was far more interesting, and even Rand had more interesting relations with his harem.

This a good observation - it is in this volume that the characters start becoming world players.

Although not my favorite book in the series, (that's the next one, Fires of Heaven), I still love this book for the clever ideas and plots inserted here and there, such as
- the World of Dreams, Verin's dreams that left scars and Egwene's horror regarding them,
- we meet some random Maidens (although, IIRC, one was Aviendha), who just start planting the idea that the Wise Ones have much in common with the Aes Sedai
- Perrin's rescue of Faile, slogging along from attempt to attempt until he finally breaks open the hedgehog thingy
- the idea of mass hysteria and nightmares when the Forsaken take up residence in the major cities
- hell, I still loved the idea of the Forsaken assuming the reins of power in various countries one by one. It was a real delight to start piecing together the idea that random lord who pops up out of nowhere to assume a powerful role in the government is actually Forsaken du Jour, as evinced by the widespread mental illness and nightmares of the populace.
- Mat capering along the rooftops of Tear, meeting the Aiel and then blowing a whole in the side of the Stone of Tear was swashbuckling at its finest.
- Egwene's Accepted test is full of narrative goodies.
- and, of course, the slam-bang ending that has everyone converging on Tear as their separate plots and quests all lead to the same place - plausibly.


Great review - keep it up!

Last year a work colleague gave me Books 7 and 8, where I discovered I really needed to start at the beginning. I have now reached Book 7 with a few interruptions of non-fiction reading. However, this is an exceptional series on Fantasy. I'm sorry I didn't discover it sooner. Thanks for a great review.