The Sandman: A Game of You by Neil Gaiman

The fifth Sandman collection sees Gaiman tackle the traditional fantasy/fairy tale 'quest' story. This is an interesting tale, one of the most traditionally-structured in the series, and once again makes use of the history already established in the series whilst setting up elements for use in future stories. 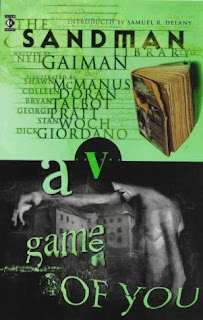 Barbie, the young woman who was one of Rose Walker's housemates in The Doll's House, has relocated to New York City and now lives in an apartment block. Other residents of the block include a transsexual named Wanda, a lesbian couple named Hazel and Foxglove, a bookish young woman named Thessaly and a surly man named George. Since the events of The Doll's House Barbie has been unable to dream and in her absence the dream-kingdom she used to inhabit, the Land, has been overrun by an evil force known as 'the Cuckoo'. Only a few of Barbie's imaginary friends have survived, and using powerful magic one of these, a giant dog named Martin Tenbones, crosses over into the real world to enlist her aid in saving them.

A Game of You is, by some reports, the least popular of the Sandman tales. I'm not sure why that is the case, although Dream spending much more time off-page than normal (only really active at the beginning and end) may have something to do with it. The mix of high fantasy with harsh reality may have something more to do with it, and the somewhat bemused-rather-than-scared-into-catatonia reactions of the other residents of the apartment block to one of their number cutting off someone's face and pinning it to the wall strains credulity somewhat. But Gaiman again gives us an interesting, intricately-crafted story featuring some very well-realised characters and some fascinating fantasy concepts. A lengthy essay by Samual R. Delaney opens this collection in which he discusses some of the ideas and themes presented, and is an interesting read. A Game of You is, at its heart, a story about identity, about what people want to be versus the sometimes harsh reality of who they actually are, and about the role that fantasy plays in people's lives.

A Game of You (****) is another solid addition to the Sandman mythos, with a strong storyline and some interesting thematic elements making up for a slightly unsatisfying ending and a distinct lack of appearances by the Sandman. It is available from Titan in the UK and Vertigo in the USA, and is part of The Absolute Sandman, Volume II, available from Vertigo in the UK and USA.
Posted by Adam Whitehead at 14:53

Email ThisBlogThis!Share to TwitterShare to FacebookShare to Pinterest
Labels: a game of you, neil gaiman, the sandman